One of the great joys (and there are many and varied) of this reviewer’s life is coming over to Curve Theatre Leicester. The city of Leicester is one that embraces its multiculturalism full on and the programming at Curve reflects that diversity and unification. As well as its programme featuring Made At Curve musicals and other high class dramatic fare – either home made or visiting – we are privileged occasionally to witness the extra-ordinary in the dramatic field.

Such is the case in their current Curve Studio world premiere production Pink Sari Revolution beautifully directed by Suba Das. It is moving; has glimpses of humour and most importantly of all it tells a true story of abuse and violence against women very accessibly. Whilst set in the ‘Badlands’ of Uttar Pradesh in India the story of domestic violence and sexual abuse is universal and a story that begs to be told. Crucially Curve are actively united with UAVA to help protect the vulnerable female or male against such abuse. After show discussions take place after every show with guest hosts announced by Curve. 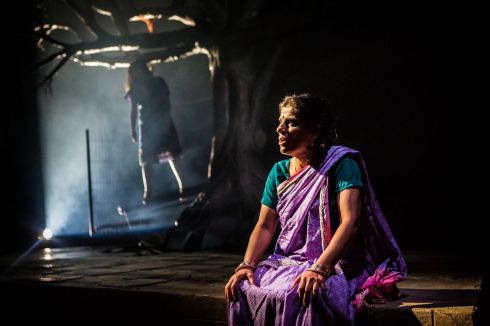 The violence in the story of Pink Sari Revolution (based on the book by Amana Fontenella-Khan) is directed at a young woman called Sheelu Nishad (Ulrika Krishnamurti). She is thrown in gaol and badly beaten. Her plight is heard of by Sampat Pal (Syreeta Kumar) a formidable and fearless leader of the Gulabi Gang, a movement of over 400,000 women fighting for their rights in a uniform of blazing pink saris. As Sampat investigates a chain of events is set in place that reveals the true cost of making a stand. It is a difficult and painful journey for both parties but humanistic Sampat Pal does not waver from her quest despite the great odds.

The acting throughout by the small cast of seven is dynamic making both full use of subtle dramatic understatement and high drama. The very high standard ensemble Gurkiaran Kaur, Mumir Khairdin, Ulrika Krishnamurti, Goldy Notay, Ronak Patani and Sharan all play multiple parts. Syreeta Kumar as Sampat Pal is totally mesmerising acting her way through the complex levels of emotions and passion for her fellow women. The role shows her to be not only a crusader but at times a difficult and challenging personality. 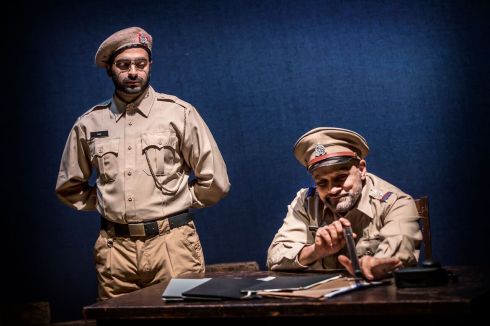 Pink Sari Revolution is adapted for the stage by Purva Naresh and the work has been two years in the making. The quality and dedication to this important subject and story are more than evident. We are transported to another world where attitudes to females are often brutal and dismissive of their existence and nature; a world where ‘accidental’ fires in the home burn the womenfolk alive so that the male can earn more dowry and re-marry. Pink Sari Revolution has to be seen and heard. It is an education as well as a stunningly crafted drama. The set design by Isla Shaw features a large tree which this reviewer interpreted as a tree symbolising hope. A hope for all human kind to exist in a world where terrible things are done in the name of mankind. Long live the Pink Sari Revolution!