Skip to content
Posted on July 17, 2017 by philiplowe Posted in comedyTagged Nottingham Theatre Royal, Out of Order

Playing at Nottingham Theatre Royal Mon 17 – Sat 22 July is Ray Cooney’s Olivier Award Winning farce Out Of Order. Comedy in all its many forms and styles has varied appeal amongst the members of a typically mixed audience. What is one man’s quietly smiling appreciation of the contrivance of a farcical plot, and its daft manifestation on stage, is another woman’s bust a gut laugh out loud experience. It depends on whether the piece engages you at all and of course, the type of humour that tickles your funny bones. 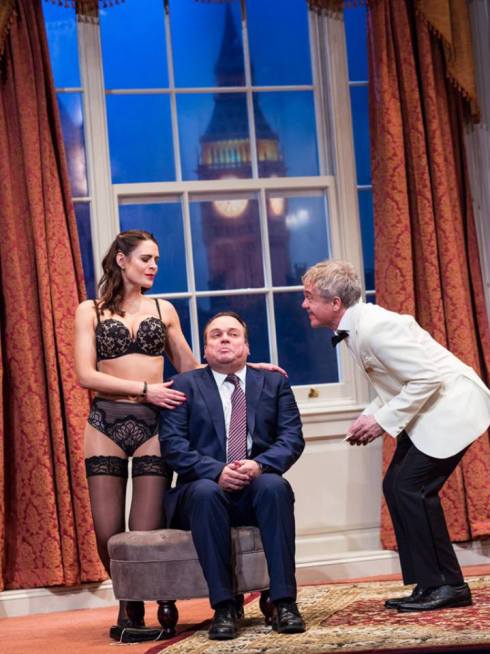 For this reviewer the text of this dated comedy is somewhat thin and clichéd and the update in political topicality and the naming of major politicians works only marginally. In this reviewer’s opinion it only serves to personally disengage, although some members of the audience clearly find these topical elements funny. The universal truths seem to work best at bringing out the comedy, especially the jokes about lying politicians generally. The physical comedy throughout the evening is well done with good timing and offers considerable consolation in an otherwise thin plot.

The actors Shaun Williamson (George Pigden), Sue Holderness (Pamela Willey), Jeffrey Harmer (Richard Willey), Susie Amy (Jane Worthington), James Holmes (The Waiter), Arthur Bostrom (The Manager), Elizabeth Elvin (Nurse Gladys Foster), Jules Brown (Ronnie Worthington) and David Warwick (The Body) all work hard to convey the broad humour in Out Of Order and their timing is spot on. A door getting genuinely stuck in the first half gets a good laugh as the actors deal with the practicalities of continuing the plot with a door that won’t open fully. And as we all know, the swift opening and closing of doors is an essential part of the pleasure of farce. In this farce a constantly slamming hotel sash window also dictates the pace of the comedy and seems to have a life of its own!

This reviewer’s personal reservations aside, Out Of Order is appreciated by the general Nottingham Theatre Royal audience whose appreciative applause and cheers recognise the hard working cast in Ray Cooney’s farce set in a Westminster Hotel opposite the House of Commons.