Curve Leicester has the honour of being the theatre in which this new UK Tour of Miss Saigon is being launched. It is no surprise because this top class modern theatre has embraced the musical theatre genre like few others, often developing their own successful Made At Curve productions.

We take our seats and, as the sound of a US army helicopter judders dramatically overhead, the familiar soaring score opens up and the excitement in the theatre feels like concentrated human electricity. It is an excitement that doesn’t let up throughout the entire thrilling, funny, musically dynamic and visually impressive, desperately heart-breaking show. With its themes of displaced peoples in terror of their lives with unknown futures this show is also socially and politically relevant to issues many refugees face, even today. Overall this entertaining and deeply thought provoking show is one ‘five star sparkling fire cracker of a show’ equal to anything in the West End!

Miss Saigon tells the story of the last days of the Vietnam War, 17 year-old Kim is forced to work in a Saigon bar run by a notorious character known as the Engineer. There she meets and falls in love with an American GI named Chris but they are torn apart by the fall of Saigon. For 3 years Kim goes on an epic journey of survival to find her way back to Chris, who has no idea he’s fathered a son. 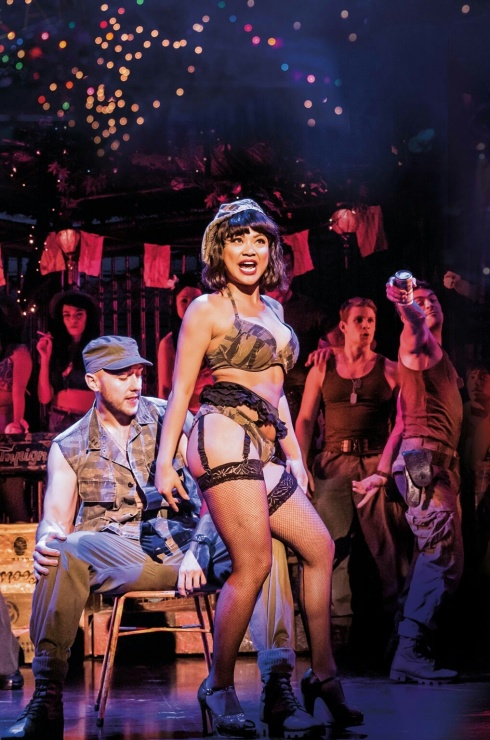 In the title, role Sooha Kim made her professional debut in a recent production of Miss Saigon at the Prince Edward Theatre London where she covered the role of Kim before going on to play the role in the Japanese production. She is a superb actress and singer and shows off her voice which conveys tenderness and joy as well as deep hurt inside.

Ashley Gilmour and Sooha Kim are perfect as lovers Kim and Chris. The initial reluctance for Chris to get involved with vulnerable Kim is made evident through Gilmour’s touching and stirring version of ‘Why God Why?’ Meanwhile, Chris, like the rapt Curve audience, starts to fall very quickly in love with Sooha Kim’s beautifully played Kim. Gilmour’s Chris comes across as a normal guy and his singing is less belting and more realistic conveying the troubled soldier well.

Red Concepcion brings his own special camp energetic take to the deviously funny Engineer. Concepcion clearly loves playing this dream of a role and his ‘American Dream’ is one of the many highlights of the show as is the Bangkok October 1978 scene. Concepcion shows us his character’s darker and more sleazy pimp side in ‘The Heat Is On In Saigon’. His is an impressive interpretation of the Engineer that Conception makes his very own.

Gerald Santos’ Thuy is at once dangerously single minded in his pursuit of childhood sweetheart Kim and yet pitiful in his indoctrinated reluctance to let her go. Santos is brilliantly dominant and totally believable in this difficult role. 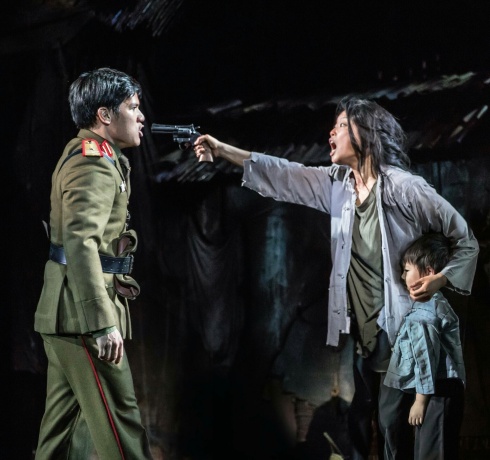 Marsha Songcome (Gigi) wrings every drop of emotion out of the song ‘Movie In My Mind’ and brings out Gigi’s desperations to escape her miserable life as a call girl to the Engineer.

Likewise, with a strong performance overall, Ryan O’Gorman pulls at the heartstrings with a soaring version of Bui Doi. His army friendship with Chris is one of sincere credibility. O’Gorman’s powerful voice suits his character well and the changes he goes through as a soldier and man after the Vietnam war.

Zoë Doano is emotionally very credible as Chris’ American wife Ellen and she gets our audience hearts stirring with the powerful song ‘Maybe’ and the blistering duet ‘Her Or Me’. Ellen is the smallest principle role in the show, but a very important one and Zoë Doano takes us deep into character’s troubled soul with her superb acting.

Young Tam is played this evening by Jade Corpuz.

The main ensemble commit totally to the piece whether playing soldiers or bikini clad call girls; desperate Vietnamese citizens or show boys and show girls. The cast for the dynamic number ‘The Morning Of The Dragon’ are full on brilliant!

Tickets are selling very quickly as expected with this highly anticipated production so book soon if you don’t want to miss it on tour. 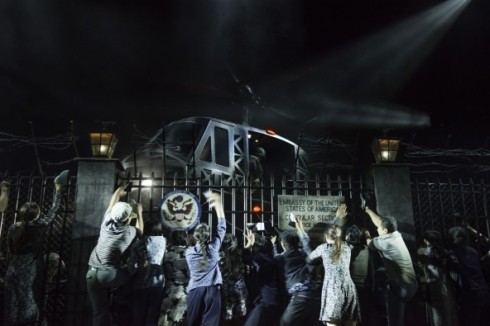 Miss Saigon has music by Claude-Michel Schönberg with lyrics by Richard Maltby Jr. and Alain Boublil, adapted from original French lyrics by Alain Boublil, with additional lyrics by Michael Mahler. The new production is directed by Laurence Connor with musical staging by Bob Avian and additional choreography by Geoffrey Garratt.  Production design is by Totie Driver and Matt Kinley based on an original concept by Adrian Vaux; costume design by Andreane Neofitou; lighting design by Bruno Poet; projections by Luke Halls; sound design by Mick Potter; and orchestrations by William David Brohn.

Historically, the musical Miss Saigon has been performed in 28 countries, over 300 cities in 15 different languages, has won over 40 awards including 2 Olivier Awards, 3 Tony Awards, and 4 Drama Desk Awards and been seen by over 35 million people worldwide.

For further details about the tour go to Miss Saigon UK and Ireland Tour.