Skip to content
Posted on July 4, 2017 by philiplowe Posted in comedyTagged Nottingham Theatre Royal, The Play That Goes Wrong

What better way to chortle away the evening than watching the utterly hilarious antics of the cast in The Play That Goes Wrong at Nottingham Theatre Royal.

From its humble beginnings In 2013 as a one act play at The Old Red Lion Theatre, The Play That Goes Wrong by Mischief Theatre has gone crashing about from strength to strength establishing itself to a long runner in the West End, collecting the Olivier Award for Best New Comedy. The ex LAMDA creators, Henry Lewis, Jonathan Sayer and Henry Shields must be very proud to also receive the What’s On Stage Award for Best New Comedy and the Broadway World Award for Best New Play. And now a touring production of this brilliantly funny show is playing at Nottingham Theatre Royal until Saturday  8th July. It is comedy mayhem at its best and superbly directed by Mark Bell with a set designed by Nigel Hook. 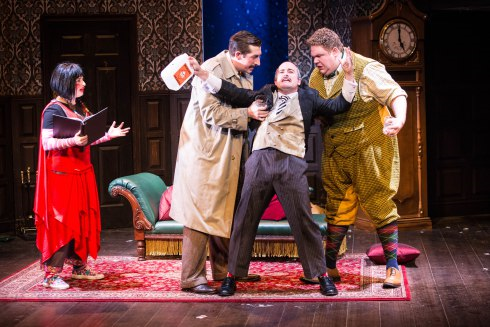 The entire cast work relentlessly to make us laugh and this is one production where the saying ‘a laugh out loud show from start to finish’ is a perfect description. Their comic timing in all regards is spot on. The touring cast are as follows; Graeme Rooney, Katie Bernstein, Patrick Warner, Jason Callender, Adam Byron, Edward Howells, Meg Mortell, Alistair Kirton, Natasha Culley, James Watterson, Helena Muir and Matthew Howell.

As plays about amateur theatre go this is one of the funniest shows this reviewer has ever seen and brilliant though Noises Off is, The Play That Goes Wrong is miles funnier. Very highly recommended. You can’t go wrong with this one.