Adapted by Sara Pascoe
Based on the novel by Jane Austen 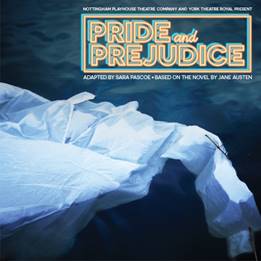 The most famous love story our country has ever produced, yet the women don’t work, the servants don’t speak, and who cares how filthy rich Mr Darcy is when he is so arrogant and RUDE? Georgian England was a world where men had property whilst women had smelling salts and piano lessons. Lucky them. Elizabeth Bennet is witty and clever, has terrible manners and muddy shoes. But with no independence, is her ending actually happy? Or have we been distracted by Colin Firth and frilly shirts?  If you’ve always heard people saying “Austen is so funny” and you never got it – you will now!

In a brand new comic adaptation by stand-up comedian Sara Pascoe, with an original score from Emmy the Great and directed by Susannah Tresilian (Director of Posh at Nottingham Playhouse in 2015), prepare yourself for a playful, truthful and occasionally disrespectful take on this brilliant novel.

Susannah Tresilian said: “It is a dream come true to be asked to direct a new adaptation of Pride and Prejudice, one of history’s greatest love stories.  I’m interested in taking a fresh look at it, whilst staying loyal to the original. I’m so pleased to be working with two other Austenites, the brilliant Sara Pascoe and Emmy the Great, to create an authentic Pride and Prejudice for a modern audience – combining, one might say, a 21st century sense with a 19th century sensibility..”

Sara Pascoe said: “I am massively excited to be adapting the book for the stage and demonstrating Austen’s courage and wit to a new generation of theatre- goers. I hope our fresh and funny version will make existing Pride and Prejudice fans fall in love with the characters all over again.”

Emmy the Great said: “It’s a privilege to be working alongside Susannah and Sara on this show. Pride and Prejudice is a book that I have come back to often in my life, and through this experience and Sara’s words I am getting to know it with a new intimacy. The humour of the original text, and this adaptation, makes working on the score extremely fun. I hope I can do it justice.”

Susannah Tresilian’s work focusses on political and social theatre to inspire change. In 2014 she founded Ariadne, an organisation which works with women who make theatre in conflict-affected areas.

As Artistic Director of Envision Theatre (2002-9) she worked from the UK and Italy (where she lived for three years) specialising in the dissemination and exploration of international collaborations.

She now works freelance often in collaboration with the European Theatre Convention and Nottingham Playhouse. She co-founded ‘Echo Viva’ a multi-national, multi-disciplinary arts festival in Italy, and ‘Palaver: Theatre and Language’ at the Contact Theatre in Manchester. She was shortlisted for the National Theatre’s Leverhulme Bursary for Emerging Theatre Director 2010.

Sara Pascoe is an actress, writer and one of the most accomplished comedians in the country. She has an impressive array of TV credits including the BAFTA nominated Twenty Twelve (BBC2), W1A (BBC2), Campus (C4), The Thick of It (BBC2) and Being Human (BBC3). As a stand up, Sara has guest starred on Live at the Apollo (BBC), Taskmaster (Dave Channel) and performed a headline show for the Live from the BBC TV series.  Sara is a regular guest on Frankie Boyle’s New World Order series and can frequently be seen on panel shows such as QI and Have I Got News For You (both for the BBC).

Sara has enjoyed great success with her previous solo live shows, with sell-out Edinburgh fringe runs and an Edinburgh Comedy Award-nomination in 2015 for ‘Sara Pascoe vs History’.

Sara subsequently toured the latter show across Australia and New Zealand, including the Melbourne International Comedy Festival.  Sara’s debut book “Animal” was released in May 2016(published by Faber & Faber) to widespread critical acclaim – and she has recently completed an extended sell-out UK stand-up tour of the same title. Sara is currently writing her 2nd book, a radio series for BBC radio 4 and will take her new solo live show, LadsLadsLads to the 2017 Edinburgh Festival.

Emmy the Great is a musician and culture writer. Born in Hong Kong, she divides her time between New York and London. Alongside her studio albums, Emmy has written original music for Starlee Kine’s Mystery Show Podcast and Mia Lidofsky’s upcoming series Strangers. She’s campaigned for Wateraid, mentored for Strummerville and given music workshops in HM Holloway Women’s Prison as part of Billy Bragg’s Jail Guitar Doors charity.