Northern Ballet’s The Boy in the Striped Pyjamas at Curve Theatre Leicester (Friday 2nd June and Sat 3rd June 2017) is a totally absorbing full length ballet by Daniel de Andrade based on the heart-breaking book by author John Boyne. It is a brave choice for a UK premiere and devotees of the book may wonder if a ballet can possibly do justice to the best selling book and film version. It can, and it certainly does with this powerful and sensitive treatment. With Daniel de Andrade’ startling, and at times, immensely moving direction and choreography fused with original and finely considered music by well known composer Gary Yershon, it scores on all levels. The set and costume design (brilliantly evoking the period) by Mark Bailey visually illustrates the complex mix of boyish innocence and the terribly grim reality unfolding haunting every scene.

The dancing throughout is faultlessly extra-ordinary echoing Eurythmics and the rigorously stylised callisthenic exercises so resonant of the rise of the Nazi regime and its endeavours to create a totally pure – super healthy – Aryan race.

Showing the personality of the Commandant, Bruno’s Father (Javier Torres) we see him being physically and immorally moulded by The Fury (Milindi Kulashe) as he is sent with his family from Berlin to Auschwitz to be commandant of the concentration camp. 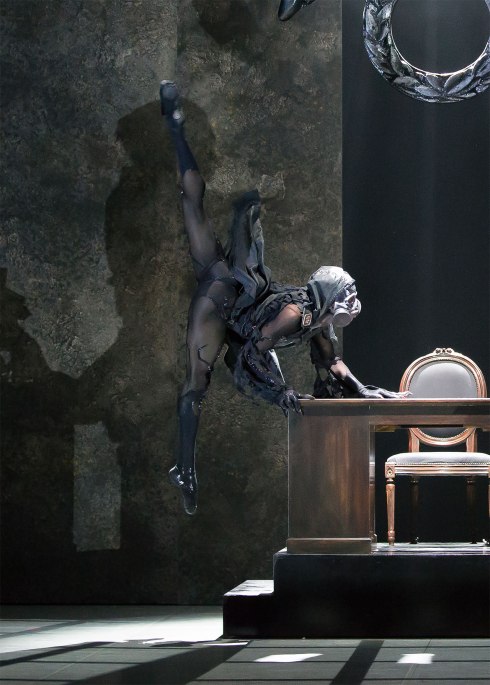 There is much to consider as the commandant is at one moment the unfeeling dispatcher of the Jewish incumbents and the very next the family man playing with his innocent son Bruno (Kevin Poeung) and haughty daughter Gretel (Antoinette Brooks Daw). All the roles in this superb Northern Ballet dance work are sublimely danced and acted. The staging is exemplary with subtle lighting states and sound that bring a lump to the throat, a prickling tear to the eyes and masses of sympathy to the heart. The impending horrors of the Holocaust haunt the atmospheres on stage as we audience members have the ‘benefit’ of fore knowledge to the story unfolding.

Milindi Kulashe is darkly malevolent and mesmerising as the evil The Fury and conversely Kevin Poeung beguiles as the innocent Bruno. His relationship with the Jewish boy Shmuel (Filippo Di Vilio) is very touching in particular when Bruno offers Shmuel some stolen food from his home through the barbed wire of the concentration camp. Di Vilio’s acting is heart-breaking in his depiction of a father-less nine year old practically starving, physically wretched, and uncared for expect by his new friend, Bruno. Equally Nicola Gervasi is super sympathetic as the former Doctor Pavel and now mistreated Jewish servant in the household of the commandant. The body language and emotional intent of both Di Vilio and Gervasi is utterly at the pitiful core of each character. We truly feel the desperate weight of their plight and are sympathetic at their attempts to be considered human in an inhuman environment.

Dancer Sean Bates is cock sure arrogance as Lieutenant Kotler, an SS lieutenant stationed at Auschwitz. Not content with seducing the gullible young girl Gretel he turns his lusts towards the wife of the commandant who is played with passion, reticence and shocked political conscience by Hannah Bateman. As is a common result, in this story featuring actions and notions of absolute power and deliberate corruption, Kotler is unconditionally stripped of his rank and sent to fight on the battle front. Bates acting and top class dancing is just perfect for the role. The blond hair and uniform adds to the historic feel. 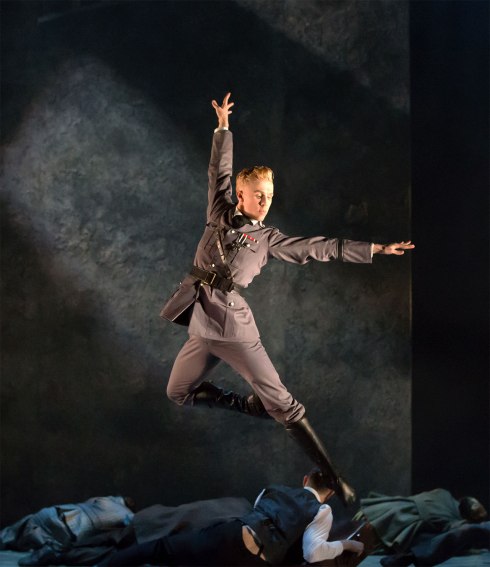 The whole piece is visually very impressive. It sticks to the structure of the book and the dancing is in proportion i.e. no extraneous ballet for additional dance entertainment. There is fine detail in the exchanges and The Boy in the Striped Pyjamas is haunting and darkly beautiful as well as being stunningly danced by the principles and the cour de ballet. The whole dedicated ensemble all sympathetically demonstrate the sadness of the fate of the Jewish people at this bleak time in history. False pride, cruelty and ‘too late’ realisation are the key words in this magnificent dance drama.

The final scenes in and around the gas chambers are theatrically realised with full emotional power and horribly creative execution, if one may use that word descriptively in this case. Gratuity doesn’t enter the dance vocabulary and sensitivity is demonstrated towards the subject by the production. The audience is super engaged throughout with many member of the Curve audience keening forward to catch every nuance of this important tale. The music is very clear in its intent and the piece is liberally soaked with moments of true poignancy juxtaposing the freedom of innocent Kindheit as well as cruel Kinderarbeit. There is a clear disparity between the German children of the SS officer being allowed to be playful children and the Jewish people, including children. existing in a state of cruel capture and treated abhorrently as exhausted and malnutrition afflicted subhuman beings lined up to be expunged. 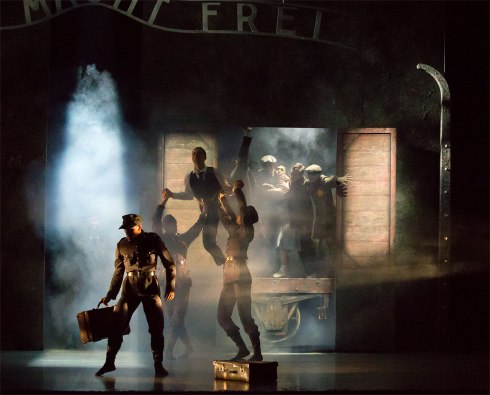 Altogether, this ballet premiere by Northern Ballet is a thought provoking evening at the theatre brilliantly realised.