With this ethos in mind we look now to the National Theatre Connections Festival and the role that East Midlands host ‘Derby Theatre’ plays in exciting the young people of today in the theatrical arts. 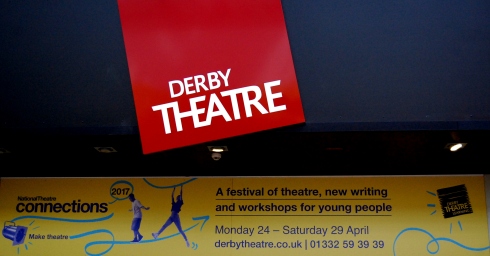 Derby Theatre say: ‘Each year, The National Theatre ask ten writers to create new plays for performance by young companies all over the country and we are thrilled to be welcoming 12 talented young companies in the region to perform at our festival. Over the jam packed 6 days young people will get the chance to see great theatre, listen to live music and take part in lots of fun and lively workshops.’ Click this Derby Theatre NT Connections LINK to discover the full programme 24th – 29th April including a Saturday full of great workshops for young people with professional actors.

East Midlands Theatre’s founder and theatre reviewer Phil Lowe pops over to Derby on the first day of the festival to check out two of its main participants: Bilborough College and New College Nottingham. Bilborough is performing The Monstrum by Kellie Smith and New College Nottingham is performing Musical Differences by Robin French. Upon arrival Phil finds that both sets of students are in the 16-18 age range and both groups are very mature and disciplined in their approach and respectful of the teaching staff and the great chance to perform at a major theatre.

The two groups are over twenty students strong and we discover that both groups are very keen to see what the others have to offer after all their separate technical rehearsals are over and the audiences are invited in to the evening performances. Each group will have a chance to watch the other in real life performance terms. The rehearsals and note giving sessions are led by each college’s core teaching staff. These young people are now existing in a professional environment with the long day rehearsals and post performance times prior to performance. Stamina and patience are paramount for all.

Expectations are high amongst the two sets of students as Phil Lowe chats with them in their rest periods. The main question is: “What do you as students expect to gain from the NT Connections experience?”

Megan Ellis “ I’d like to find out how a professional theatre like Derby Theatre works. I’ve never performed here before and I’m looking forward to seeing backstage and learning something of the differences between them and the college studio at Bilborough. I expect it will be a completely different environment.”

Alfie Sanders “ I think it will be a great experience and an insight into the industry. It’s great and important because we are being treated like adults. Not only in the respect we are being shown but also in the finer detail like having a lanyard and being given a backstage tour.”

Ashleigh Clewer “I think I will be really interested in seeing another college that is close to us (both in Nottingham) perform. There is always the chance to learn from others. I like that.”

Brianna Undy “ I’m interested to see how another college has taken on what we have taken on and how they deal with the environment as well. We are the same age group 16-18. The whole thing is very stimulating!”

Molly Hewitt Richards “ We performed ‘ The Monstrum‘ at our college and it’s very exciting to see how different it is going to be with a much bigger audience. I guess we had about a hundred people each night see us at Bilborough. This audience could be triple that. I hope! We have got to consider that in our performing tonight. We are on the main stage at Derby Theatre so it will be interesting to see how the play changes and how it feels for us to perform it and how the audience approach it.”

Kieran Payne “ I’m expecting a bit of variety because I know our performances are very different. I was listening in to what some of the students from NCN were talking about and they said they were really enjoying what they were doing. Their play is a ‘twitchy one’ because it explains what a late teenager like us are going through. How we feel and so on. The Monstrum is set in the past. Their play is contemporary. I like making new friends and you never know when we may meet up again in the professional world. We both appear to have strong casts so I am really looking forward to their Musical Differences tonight.”

Damian Higgins (staff member) “ For me it’s more about them having an experience of being able to work in a professional theatre. At Bilborough they’ve got the safety of the college. Coming to this pro theatre it is a whole new ballgame. On the Derby Theatre stage they’ve got to consider projection without mikes on a very big stage. Plus they will experience having to work long hours in technical rehearsal. At this stage the young students generally believe that stage work is all glamorous but a professional day can be very long and tiring working sometimes from 8am to 10pm! Myself, Mia and Tracy will do our best to make it a great experience for them but they must expect to concentrate and react quickly to any direction. I have great confidence in them to do that. They are great students.”

George Johnson “ How do I feel? Kinda excited, not only for our performance but also to see what the Bilborough students are doing. They’re a similar age to us and it’s good to see people our age taking scripts on that are really malleable and can be interpreted in different ways. I imagine that our Musical Differences is a lot more naturalistic than The Monstrum. Our play goes through the trials and tribulations of being a teenager and tackles such things as drugs, social media and technology and how they affect people. These are subjects that touch upon human emotions and communication too. Whilst we have been learning and performing the play we have been discussing subjects like popularity and social hierarchy in education because they are strong issues and they reflect on nastier issues like bullying. We do have a theatre at NCN but this much larger experience is something very new for me! I hope we get a good audience tonight!”

Rhianon Robertson “My approach is like I’ll really try to do my best, go out there and have fun, not mess up because otherwise … well the director won’t be happy and I’ll feel I’ve let people down. Oh yeah… not fidgeting on stage in the last scene and generally being aware of what’s going on.”

Callum “It (the play) gives us the experience of becoming different characters. It depends on the situation in what scene you are trying to get the message across. You are conveying your character in a variety of different ways and their true emotions towards each other.”

Rhianon Robertson “ That’s right Callum. We also show the distinct way the characters play their instruments and yet in one scene the character Alex Stokes can’t sing and another character can’t play the guitar.”

The NCN students go on to explain that when they first performed Musical Differences they had some feedback that showed that the audience was sometimes confused as to who was playing who. This was because various people were playing different aspects of a group of characters. They explain that some further work was needed in the stage direction and defining the characters as they appear on stage. Some of this was done by spotlighting; some by declaration of character name and other work on actor placement within the playing area and using the space creatively. Students Asniyn and Drew further explained their advancement on character focus by saying that they learnt to focus on aspects of physicality and that all the cast learnt to ‘own the play’ by co-directing certain smaller scenes. In doing all these things the production of Musical Differences became a clearer and more theatrically exciting piece.

Phil spends some time observing the Bilborough students rehearsing The Monstrum on the main Derby Theatre stage and is impressed with the teenagers’ professional behaviour. This is particularly true during some new directional decisions and cast groupings happening as the larger stage is taken into consideration. Creating lit atmosphere with a much bigger lighting desk brings its own sense of excitement and achievement. Once the full run dress rehearsal gets under way some excellent acting is shown by the whole Bilborough ensemble.

The NCN students are gathered for their ‘notes’ by their course leaders. These are to alert the students to aspects of their performance that are well done and also instructions for improvement ready for their evening performance. The advice was centred around being in character all the time and being aware of how one reacts with the other character whether in direct conversation with them or observational. Even if they are doing very little on stage they should be taking in what is being said by the other actors. If they are taking note of the action to the observer it is really noticeable. As a general note the tutor makes the students aware that some of them are starting their lines full power then drifting off towards the end of the speech. The energy at the end of the line needs to be as relevant and as truthful as the energy at the beginning of the line. Projection and diction are very important as even little flaws in diction are really noticeable on stage. Finally the student actors need to be aware of where they are on stage in relation to someone else as the Derby Theatre stage is a lot deeper than the NCN students are used to. The relief of stage congestion is examined as a thing that the students need to be aware of as well as being given more individualised and positive learning advice about their stagecraft.

Throughout the festival other groups such as Chapter 4, Flying High, Creative Learning Stoke, Walton Acting Company and Tiptoe will be having similarly exciting theatre experiences with their own productions of The Monstrum, Fomo, Extremism, The School Film, #Yolo and Zero for the Young Dudes! Do check out the earlier link and support this fantastic festival for young people who are the inspiring young student theatre practitioners and audiences of today – not tomorrow.