In 1692 the town of Salem Massachusetts (hardly a village by today’s standards) stood with its back to hard toiled fields and the foreboding density of forests stretching into the unknown continent of The New World. The Puritan inhabitants led fearful lives: a bad winter could cause starvation and death; wild animals in the forests could kill or main the human settlers and indigenous Indian tribes could attack at any point. The British puritan settlers had fled persecution in Europe and they lived their hard lives by the religious dictates of the King James Bible. God and Lucifer were equally real and equally feared. The Devil was believed to be able to manifest himself through his human agents and the spirit was understood to be able to leave the body palpably and visibly. The invisible world could become visible to those who practised sorcery and witchcraft. Supernatural terror and suspicion were easily aroused amongst isolated communities such as those at Salem and nearby Beverley and the need to protect the populace against evil was paramount. 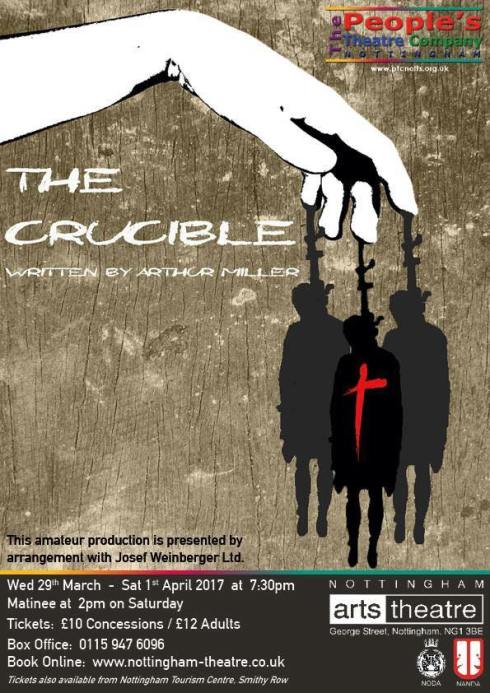 Witchcraft was a practice to be driven out at all costs and ‘guilty’ witches were hung without compunction. Guilt was a presiding natural inner state for many and the sin of pride was seen to come before many a fall. Adultery was a terrible sin and the Bible’s Ten Commandments were followed to the very letter. Opportunities to wreak personal revenge against innocent others in the heightened and superstitious climate of the witch trials were easily brought about and exploited to the hilt. Christian morality soared skywards and fell dramatically back down to the fatal punishment of the gibbet for many. Such is a brief historical and social background to the story behind Arthur Miller’s white hot play The Crucible. 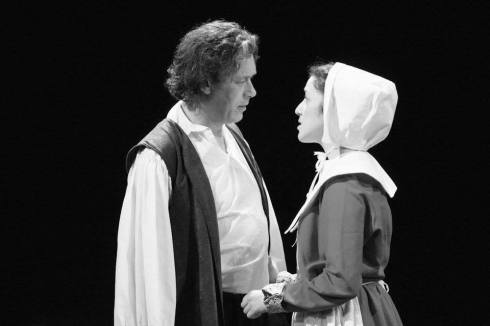 The Crucible is a political parable telling the tragic story of the Salem witchcraft trials and showing immediately apparent links with the anti-communism witch hunts of the 1950s in America. During these Miller saw the practice of victims naming other supposedly guilty people (often in the arts) in public confessions. He recognised these announcements as parallels with the naming of names in the witchcraft trials in Salem in 1692. The Crucible is based on historical true facts but some of the real life characters from history have been condensed into one character. This is especially true of Deputy Governor Danforth and Judge Hathorne. Elizabeth and John Proctor were real, as was Abigail Williams and many of the other named characters in the play. 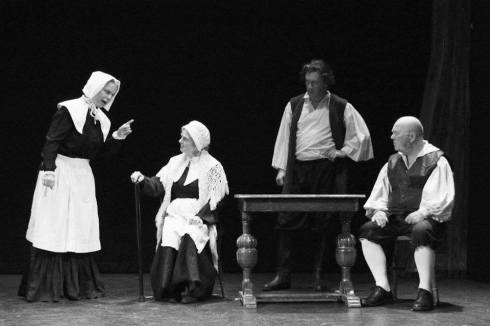 In The People’s Theatre Company’s current chilling and fascinating production of The Crucible the twenty performers create a captivating old time community feel with no weak links whatsoever. Many potentially difficult passages of text are delivered in a very natural manner and Jessica McLean’s direction is impressive with natural groupings, good dynamics between the actors and perfect sight lines and most importantly – clarity. The story of Miller’s The Crucible is delivered with earthy honesty and passion where needed in this fine production. The simple set ( Bob Wood set designer) serves the narrative very well and allows for swift scene changes where needed. Whether intentional or not the pitch black background works well in highlighting the spooky nature of the work.

…delivered in a very natural manner… 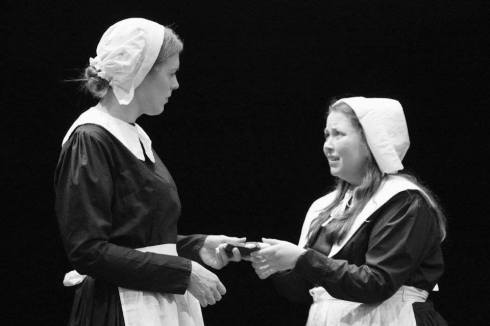 Rob Goll is superbly believable as the farmer and main protagonist John Proctor. Goll is a fine and generous actor and he handles the severe journey of his character with acute precision. He is emotional without histrionics and totally inspiring on stage in one of theatre’s tougher roles. Never showy – always truthful. 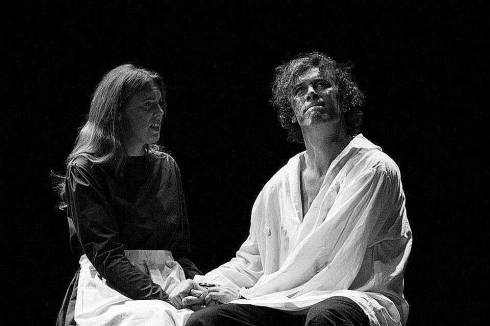 Emma Carlton partners Goll’s Proctor as Elizabeth Proctor, mother of three unseen boys and recently cuckolded wife of John Proctor. Carlton’s portrayal is a master class of understatement and vulnerability that eventually finds strength in her loving and forgiving convictions. Her mindful utterance of the word ‘adultery’ during the Ten Commandments scene speaks volumes about their relationship. Carlton is incredibly moving in the final scenes.

Both Heather Reynolds (Mary Warren) and Marina Kyriacou (Abigail Williams) offer up powerful portrayals and both come into their own in the terrifying ‘yellow bird’ court scene in the second half. 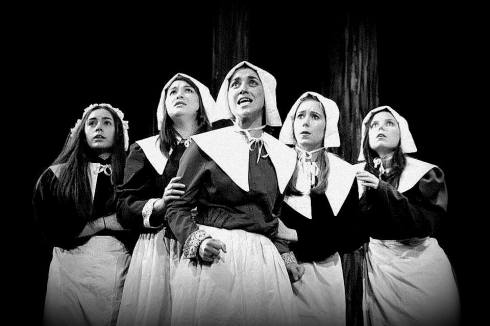 The second part relies on a strong pairing with authority characters Deputy Governor Danforth (Rob Suttle) and Judge Hathorne (Adam Chapman). Both Suttle and Chapman do this production proud especially Suttle in delivering many of Miller’s tougher mind and tongue bending speeches with a fine sense of command and an easy understanding of the ironic nature of a higher member of an important part of the 1690’s judicial system. “While I speak God’s law I will not crack its voice with whimpering…” is such a brilliant line from Danforth. It speaks of Christian justice with rock hard resolve. Ironically the statement is almost inhuman. 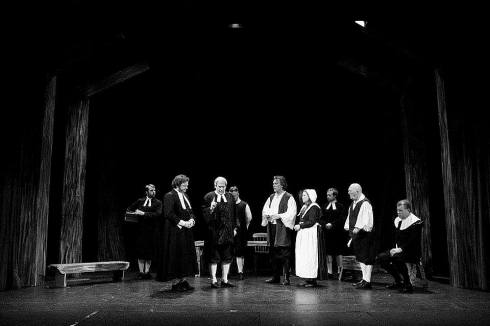 Christopher Collins nearly steals the show as the ice cold Reverend Hale. Just when you think his icy tone is about to thaw, due to kindly good natured actions, Collins switches the internal freezer up several notches to ‘protect’ Christianity from the heathen and evil spirits. Collins has superb presence on stage and gives us a very intelligent and realistic portrayal of this ungodly man of God.

Lindsey Parr revels in her role as shit stirring Ann Putnam and the vengeful glee in her face as she comes out with the line “It’s death y know, it’s death drivin’ into them, forked and hoofed.” is pitch fork perfect. All the women in this production present themselves with real gritty character behind them and this aspect of fine detailing makes it all such a joy to watch. The young women in the ‘invisible yellow bird’ scene have brilliant timing in what is a very complex set of quick exchanges that need discipline from all the cast in the chaotically devil cursed court.

Malcolm Todd is totally wondrous as the agitated and over zealous Reverend Parris. Compelling in the first act he exemplifies neurotic religious fervour in the court scene with his wild exhortations demanding personal vengeance for assumed harms and affronts. Even though Parris’s character is unsympathetic Todd brings out the innate flawed human being behind the bluster very well. 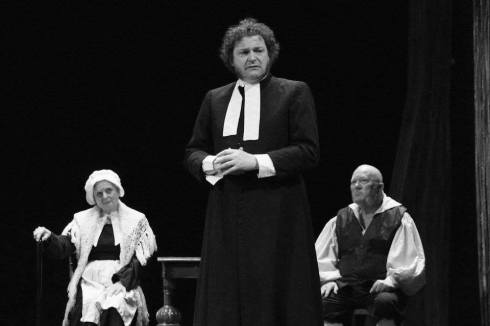 Sarah Astill is outstanding in the tiny but vital role of Tituba the slave of Reverend Pariss. Totally believable in a portrayal that so easily could be overdone. Emotionally persuasive in the first act Astill wrings every bit of mad sympathy out of her ‘going off with the devil’ speeches in the final act. 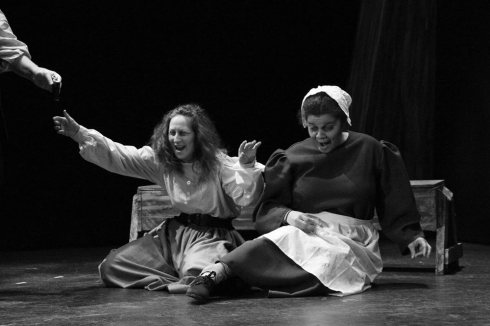 The remaining small part cast work exceptionally well in demonstrating the truthful portrayal of their roles making the ‘whole’ of The Crucible very credible and professional.

The Crucible at Nottingham Arts Theatre is a highlight of this theatrical season for us at East Midlands Theatre.com. Highly recommended. It runs until Sat 1 April 2017.