The terraced two up – two down miners’ tithe cottage set for Anita and Me is so lifelike one feels almost duty bound to sneak on stage and have a nose through one of the netted curtains. Upon glegging in yowd expect to encounter a Vintage lovers treasure trove of 1960s artefacts chick. This is a theatrical set by Bob Bailey and so what goes on behind closed doors must be left mostly to our imaginations. We are told of outside loos backing on to untended meadows littered with old industrial machinery. Those of us old enough can certainly use our imaginations to bring the grim thoughts of squares of old newspaper for bog roll and the damp and chilly, spider infested, outside loos to mind. As well as an excellent set and great lighting and sound (Chahine Yavoyan and Ben & Max Ringham) here in Anita and Me are human treasures a plenty under the excellent direction of Roxana Silbert. 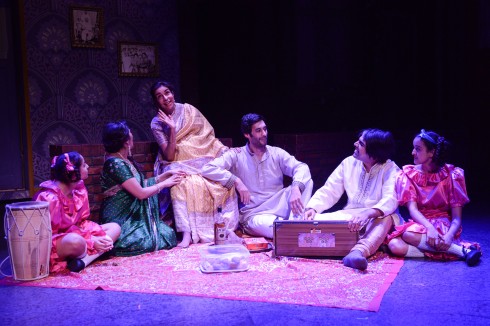 Aasiya Shah as Meena shimmers like the brightest of the most colourful saris on stage. Full of awkward exuberant schoolgirl charm, Shah perfectly captures Meena’s yearning to be accepted by the wayward Anita (Laura Aramayo) and is a delight when constantly asking (semi sung) advice from Jackie comic’s agony aunts, Cathy and Claire. Shah’s perfect Meena Kumar comes skipping and jumping on to the Nottingham Theatre Royal stage directly from the pages of Meera Syal’s adored novel. 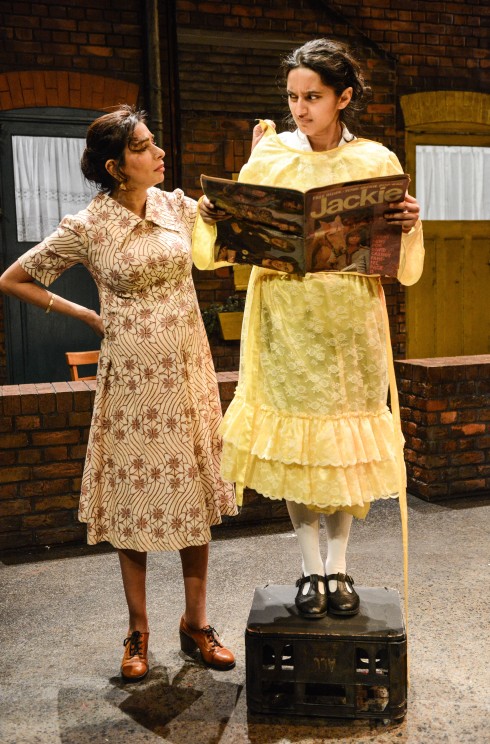 Aramayo is equally perfect as the titular mini skirt wearing Anita Rutter. This is a fully explored in depth character depiction – that of a teenager high on her own sexual allure and ballsy attitudes. Despite her outward brash show of confidence not all is OK in the life of Miss Anita Rutter. For Anita friendships are dictated by gang membership and despite her outward confidence there is an underlying need to be loved that is not on offer from her parents. In one scene Anita complains there is no food in the house and Deidre, (Rebekah Hinds) her fag smoking strumpet of a mother, seems indifferent to the children’s hunger as long as she has her new lipstick and money to go out at night. This Anita may be gauche, at times embarrassingly uncultured, but the girl has heart even if it is misplaced romantically with the local teenage heartthrob/skinhead Sam Lowridge excellently played by Sam Cole. As Anita’s sickly younger sister Tracey, Megan McCormick shines. Her role as Sandy with the dog Nigger is very funny. 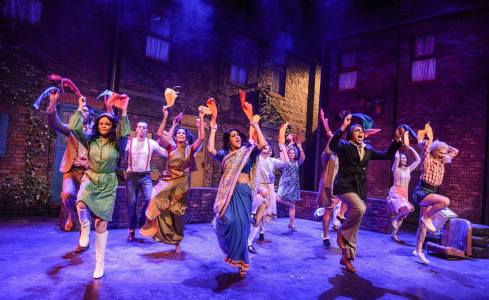 As Meena’s concerned, loving and patient parents Daljit and Shyam both Shobna Gulati and Robert Mountford come out of their front door and on to the communal yard fully formed. 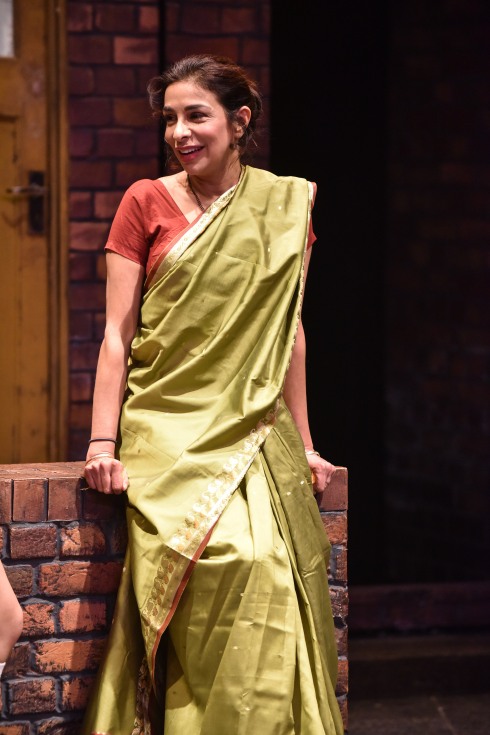 Gulati is magnificent as the newly pregnant Daljit. She portrays the Punjabi woman’s hope and fears about an Indian family living an isolated life in an otherwise white populated community with real emotional honesty. Whether drained from just giving birth to her new son Sunil or happy and alive in family reunions Gulati shows her theatrical metal and gently buffs it so it shines like the stars in the night sky. 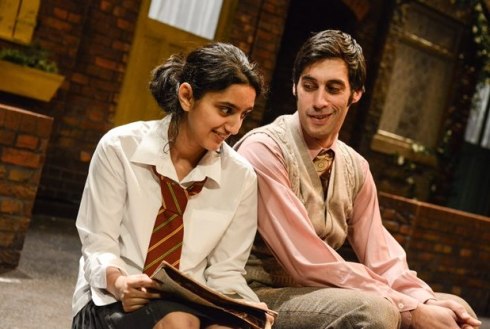 Mountford plays the father Shyam with the lightest of touches displaying a gentle honourable man who is not weak but doesn’t need to show his authority through anger. His relationship with Meena is very touching and would we all have such a caring and softly strong father who sings mournful songs like an Indian angel. 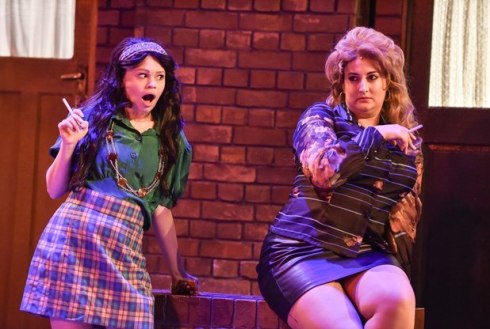 The whole show centres around this 1960s ex slate mining community. Old fashioned family values and protecting the loved ones are key motivators to the piece. As is having a great sense of fun and humour. It is about human belonging and yet Tanika Gupta’s text regularly refers to suppressed alienation and starting over again with nothing, in worlds both emotional and all too tangible. Yet, you readers may alert this reviewer to the fact that the show is billed as a comedy and ‘yes’ we certainly do get plenty of laugh out loud moments amongst this play full of drama and lively music. 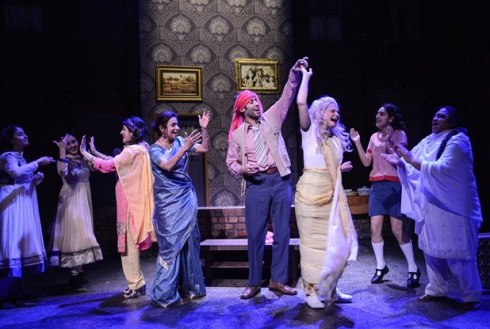 Like truly gifted comic actors Sejal Keshwala (Aunty Shaila) and Rina Fatania (Nanima) light up the Tollington terraces on stage with their characters and vocal skills. Both women are subtly amusing throughout and Fatania gets the audience chortling with her lovable straight talking Grandma role. Therese Collins is a sympathetic jam tart making friend to all, Mrs Worrell. We never get to see the terminally ill Mr Worrell but Collins acting helps us to totally believe in his sad existence. The aforementioned Rebekah Hinds playing Anita’s mother Deidre, is also almost unrecognisable and very amusing as bible thumping greengrocer and do-gooder Mrs Ormerod.

Many of the actors play dual roles and the talents of Tom Oakley (Ned/Bazzer), Humera Syed (Pinky), Aaron Virdee (Uncle Amman/Mr Bhatra) and Claire Worboys (Mrs Lowbridge) are all thoroughly appreciated by the audience this evening. 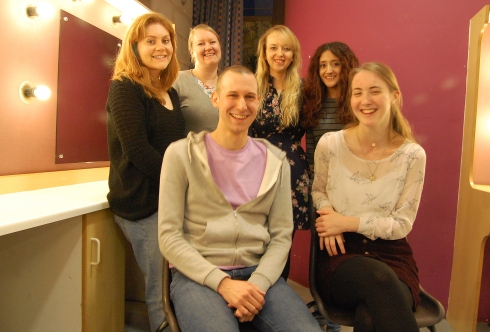 Six Nottingham community players (above) join the professional cast this week and are known as the Bostin’ Brigade. The talented six are Michelle Smith, Lucy Wakefield, Marcus Whybrow, Amara Iqbal, Estelle Smith and Alice Gee. They work very hard within the piece and blend into and enhance the comic drama seamlessly. Associate producer Neale Birch was very recently on hand to coach the community players through their parts within the play and they are a treat to behold whether they are Tollington wenches who work at the ball bearing factory, individuals at the fairground or dancing and singing with the professionals. They are truly ‘Bostin!’

Anita and Me is produced by The Touring Consortium Theatre Company and Birmingham Rep.

The hilarious and poignant Anita and Me runs at Nottingham Theatre Royal from Tue 14 – Sat 18 March.