Stephen Lowe’s Nottingham based play Touched still grabs the heart and the head and refuses to let either go.  Like the cherry blossom, pink and fragile on the tree of life, it represents the fragility and transience of life. It too is a reminder that life can be overwhelmingly beautiful but potentially cut tragically short. The word ‘touched’ is a term of tactile endearment as well as inferring a slight craziness in a person. The beating heart of this symbolically wonderful play is the dramatic fusion of the two. In particular, the symbolism of the sole tree in blossom, in the final scene, signals renewal and respect for those no longer here in Japanese culture. 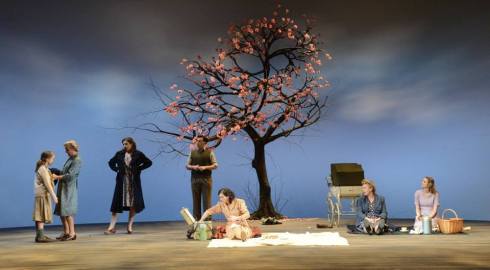 Touched is set in 1945 and based in Nottingham. When the play was originally written in 1977 author Stephen Lowe recognised that there was hardly any material available from which to draw and to learn about the lives of women at home during World War Two. His own father was with the 8th Army based in North Africa and then Italy and such historic events were very well documented. Stephen Lowe felt that his mother’s generation had been ignored. He began to listen more closely to the tales of his mother and her friends and the background of Touched, a play about three sisters in post WW2 Nottingham slowly began to grow. 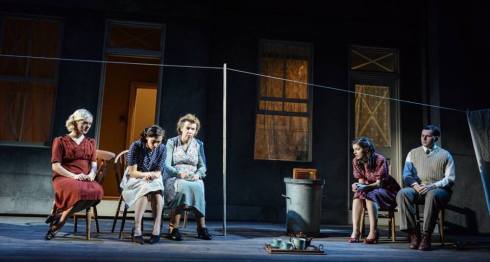 This was, ostensibly, a time of peace but a shaky one during the hundred days from Victory – in – Europe Day (8th May) to Victory – in Japan Day (15th August). After the war was over the horrors of Belsen emerged and abject terror was felt as the first Atomic bomb dropped on Hiroshima on 6th August followed by another on Nagasaki. Political upheaval and a worldwide desperation for peace and a return to normality continued to create a threatened world of major instability. In the UK alone the newly elected Labour government try to reassure the populace with messages of optimistic hope and their manifesto entitled “Let Us Face The Future” is released on June 4th. It would be a long time until food rationing would end and many would face futures without loved ones who had died during the war. It is all history now but as Stephen Lowe reflects – ‘significant history’. 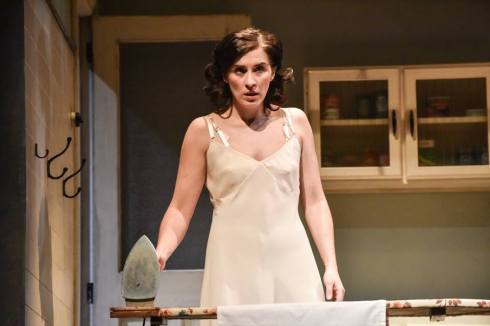 The 2017 version of Touched is directed by local director Matt Aston and features five actors (amongst a total cast of nine) that have successfully emerged from the much lauded Nottingham Television Workshop. These are Vicky McClure as Sandra, Lady Bay’s Aisling Loftus as Joan, Chloe Harris as Betty, Luke Gell as Keith and George Boden as Johnny. Esther Coles (Mary) went to Clarendon College and then trained at RADA. Given all that Nottingham talent we should hope for some excellent Nottingham accents – and we do get um. You can almost feel the Nottingham pride sweeping from the auditorium to the stage and back me ducks. Soppy daft boggehs that we are. 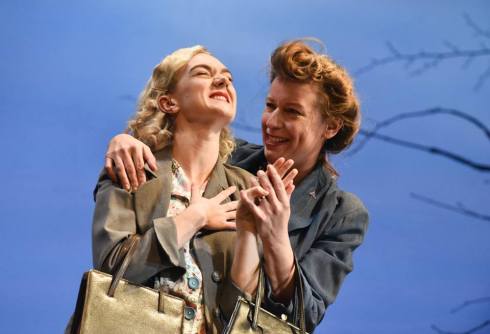 The Nottingham Playhouse have got it spot on with their casting and choice of production. Touched is a milestone of a play with a poignant subject sliced through with tough humour borne of hard circumstances. Bringing in major names from television and film like Bafta award winning Vicky McClure and Aisling Loftus (Mr Selfridge and BBC’s epic War and Peace) makes this production a huge draw. All great stuff for the Nottingham Playhouse box office duckeh. The play is very much a Nottingham play and wouldn’t work, for example, if one changed the accent and placed it elsewhere. 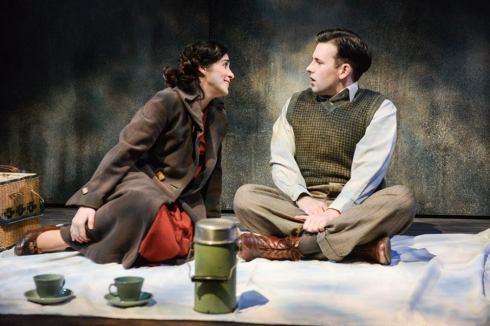 The characters are concerned about the immediate ‘here and right now’ of their lives but it is combined with a natural focus on the future. What is it going to be like when the men return? Will they return? The women have a radical vision and are excited about Labour getting elected and the potential of having worker’s rights and regulations and the rise of the unions. It is a play of working class morality and strict rules about fraternisation with the Italian POWs especially connected to the heroine Sandra. Babies haunt the fibres of this story and the consciences of those who believe they are pregnant and the strong opinions of family. The acting from all of the cast is exemplary and ultra naturalistic. 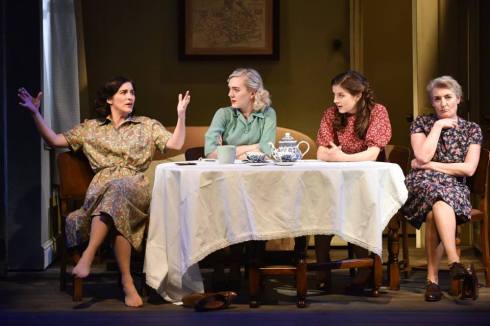 With the multi -faceted set designs of exteriors and domestic/workplace interiors set designer Jamie Vartan creates visually eloquent spaces for the drama to slowly unfold. Starkly realised projections (William Simpson) and period news audio broadcasts heighten and emphasise the socio-political aspects of the play where radio was a vital medium for censored but relatively up to date news on the post war position for UK residents. The enigmatic soundscape is designed by Julian Butler.  Overall, all these tools of presenting drama are put to excellent use on the Nottingham Playhouse main stage in this most touching production of Touched.

One thought on “Review: Stephen Lowe’s Touched at Nottingham Playhouse.”