In the sweltering month of August  1988 this reviewer saw La Cage Aux Folles (Ein Käfig Voller Narren) at the impressive Theater Des Westens in Berlin. He was just a musical theatre lover back then – no reviews to worry about writing. He remembers the song ‘I Am What I Am’ (Ich Bin Was Ich Bin) sung by Helmut Baumann as Albin and the real dramatic novelty of seeing pieces of stage furniture gliding across the large stage untouched by human hands. All these things were great but, sadly little else remains of the experience excepting the thunderous foot stamping/hand clapping German applause at the end. It could hardly have been a forgettable show but memories do fade for those of us who have forgotten where we have placed the knackered tap shoes of life.

So, madame- monsieurs, kindly press the sparkly pink refresh button three times, click those big girl’s high heels and here we are now in 2017 with the Bill Kenwright touring production of La Cage Aux Folles currently wowing the audiences at Nottingham Theatre Royal. We have arrived! Trust us, this one is totally unforgettable! We are witnessing such a fantastically entertaining show tonight. Glamour, glitz, teeth and tits and all.

“Und ja, sehr geehrte, Herr John Partridge, this is that cheeky German speaking reviewer who says ‘Nein’ to you when your Albin/Zaza asks if s/he might be losing her audience when s/he speaks ein bißchen Deutsch.” Well we got a laugh. Nicht wahr?

This version of La Cage Aux Folles delivers amazingly good choreography by Bill Deamer and all the Les Cagelles ‘lady’ dancers are supremely good throughout and look utterly stunning in their various La Cage costumes. It is truly hard to tell the boys from the girls sometimes in this show!

The entertainment is full of warm hearted campery and to paraphrase or, even be as naughty as to nick a phrase from the lyrics: the best of times are certainly right now in this gorgeous theatre – transported to exotic St Tropez with the company of this most excellent musical theatre company.

The set and costume designs (Gary McCann) are out of this world as we are transported to the La Cage Aux Folles nightclub both stage and backstage;  the OTT apartment of George (Adrian Zmed) and Albin/Zaza (John Partridge) and their bonkers transvestite maid Jacob (Samson Ajewole); the shops of the promenade and the sophisticated glamour of Restaurant Chez Jacqueline. Each switch to a new location is tremendously slick and the costumes become more sumptuous by the second. This is not a production that skimps on the glamour factor by any means!

La Cage Aux Folles is chock full of instantly hummable songs such as We Are What We Are, A Little More Mascara, With Anne On My Arm, With You On My Arm, Song On The Sand, La Cage Aux Folles, I Am What I Am, Masculinity, Look Over There and The Best Of Times. Such is the musical theatre genius of creators Jerry Herman and Harvey Fierstein.

As to the performances:  John Partridge as drag queen Albin/Zaza is utterly beguiling, camp as f*ck, winningly sympathetic and tremendously funny with one belter of a voice. You might call it Gay show biz heaven in a tasty baguette ou quelque chose comme ça. Ooer monsieur dame! His character Albin adopts the twang of Northern England and this works very well indeed and actually gives the role a further depth and a grounded nature somehow, for one so flighty.

Partridge runs the gamut of high and low emotions in the show and his genuine artistic commitment takes the piece from being very good to utterly superb. In one of the livelier, full drag, song and dance numbers (see image below) Partridge gives us a vocal and visual hint of how brilliant he would be as Rocky Horror’s Frank N Furter.

Georges (Adrian Zmed) is the solid part of the relationship between gay couple Georges and Albin. His songs support the love between the two and he is best in the love songs Look Over There, Song On The Sand and the funny number Masculinity. There is a genuine compassion between the two actors paying the gay couple and this is not unappreciated by the audience tonight.

Marti Webb has a nice cameo role in the musical as Jacqueline and treats us to her wonderful voice when the script allows. This fan/reviewer only wishes that her character had a bigger part in the show. Characters Jean Michel (Dougie Carter) and his stage fiancée Anne (Alexandra Robinson) both give rounded and believable performances and Carter’s rendition of With Anne On My Arm is touching. 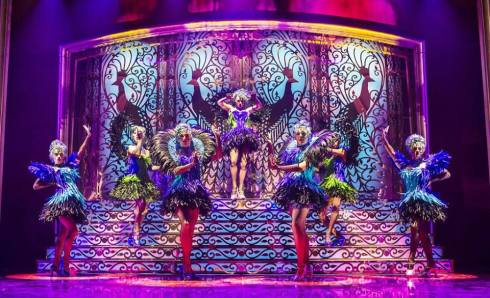 Samson Ajewole nearly steals the show with his high camp character Jacob the ‘ house maid with ambitions to be a La Cage Aux Folles star.’ Dressed in a variety of outrageous costumes Ajewole is a naturally witty man with superb timing in his interactions with the cast. The audience love him! Or is it her? This reviewer is very confused now. Jon Francis – who is certainly a man – is wonderful as Francis the, perpetually ‘wounded in love’, stage manager of La Cage.

Paul F Monaghan and Su Douglas double up as the bigoted and pompous Edouard Dindon and the equitable cafe owner Renaud and Su as put upon Marie Dindon and the serveuse Mde Renaud. Both are funny in their roles and Monaghan’s right wing Dindon rightly gets booed by the audience for his stark homophobic remarks and bad attitude towards his wife.

The whole of this popular Bill Kenwright touring production of La Cage Aux Folles could well be described as a sure fire ticket to musical theatre heaven. It is directed by Martin Connor, wigs and make up design by Richard Mawbey, superb lighting by Ben Cracknell and sharp sound design by Dan Samson. The entire ensemble work tremendously hard throughout and this extravaganza of a blissful show is packed with energy and this one will definitely be one that this reviewer will not forget in a very long time. Nor, given the enthusiastic standing ovation will it fade from the collective memory of the audience too. “Life’s Not Worth A Damn ‘Til You Can Say – You Have Seen This Show – Damn It!”