Described in the advertising as ‘A Heavenly Hit Show’ (Mail On Sunday) this #MadeAtCurve production of Sister Act – a divine musical comedy currently at Nottingham Theatre Royal lives up to all the hype and then some! 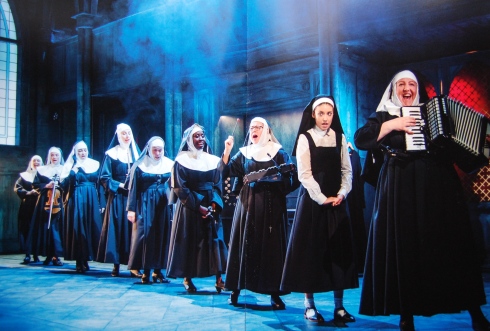 Directed by Craig Revel Horwood with music by Alan Menken and lyrics by Glenn Slater with the book by Cheri & Bill Steinkellner with Douglas Carter Beane, this touring production is an energetic hoot from start to big finish.

… an energetic hoot from start to big finish…

On this press night we have understudy Joanna Francis as Deloris Van Cartier, a disco diva whose life takes a surprising turn when she witnesses her gangster boyfriend Curtis commit a cold blooded murder. She is ordered by the police to enter a convent disguised as a nun – with hilarious results. The funky and funny show is a sparkling tribute to the universal power of friendship, sisterhood and music. The Nottingham Theatre Royal audience appear to totally love it and the curtain call offers them a heart warming chance to show their appreciation for Joanna Francis’ superb portrayal as the soul diva with a soul and grateful applause to the entire cast.

As Deloris Van Cartier, Joanna Francis joins the fabulous cast belting out such upbeat numbers as Fabulous Baby!, It’s Good To Be A Nun, Take Me to Heaven, Sunday Morning Fever, Bless Our Show, Spread The Love Around and of course Sister Act!

The lively nuns are outstandingly funny and the noise of their singing (before tuition from Deloris) is worse than a bunch of cats whose tails have been continually stood on. Watching their antics brings to mind another musical that is rarely done – Nunsense. Liz Kitchen plays Sister Mary Lazarus to perfection and Susannah Van Den Berg is uproariously bonkers as accordion, alto sax, and clarinet playing Sister Mary Patrick. As the sympathetic and shy Sister Mary Robert Irish actress Sarah Goggin is spot on in her timid body language and her act two rendition of the song of wishful transformation, The Life I Never Had, garners great applause. The Mother Superior at the convent is wonderfully portrayed by Karen Mann as a concerned and strictly religious person who we discover has a need for more than one glass of wine of an evening. Mann’s song Haven’t Got A Prayer is gutsy musical theatre heaven sung by a true pro.

Director Craig Revel Horwood has chosen to have the performers perform live music on stage in this show and in most parts it works very well even with the nuns suddenly having access to saxophones and such. A certain degree of theatrical licence in this manner can be acceptable fun – a part of the joy and liveliness of the show. However, in this production, having the male characters – police and gangsters – walking around with a guitar across their backs can prove visually incongruous.

Tough gangster Curtis (Aaron Lee Lambert) has a great deep soulful voice and good stage presence and really shines in his menacing When I Find My Baby. Curtis’ dumb gangster aides Pablo (Ricky Rojas) TJ (Sandy Grigelis) and Joey (Samuel Morgan Grahame) are superb fun and become especially louche in the pastiche soul number Lady In The Long Black Dress. Their slow motion shoot out in the convent is cleverly actualised and they are very comical throughout.

Joe Vetch plays cop Sweaty Eddie with the right amount of personal sadness and longing for old school friend Deloris. His disco camped up interpretation of I Could Be That Guy is very funny with echoes of Saturday Night Fever Travolta style poses. Tim Maxwell Clarke adds enormously to the energy and fun of the show as the Pope loving Monsignor O’Hara. The entire cast work their socks off to bring Sister Act live and buzzing to the stage.

Sister Act is wonderfully uplifting with glitter balls cascading gyrating swarms of little bright lights all over the ceiling and walls of the Nottingham Theatre Royal stalls and balconies. It is slick and the costumes (Matthew Wright Set and Costume designer) almost make you want to dress up like you did in the bad taste 1970s. Now where did I moth ball store that cheese cloth shirt and my old flares?