Directed by Allie Spencer and adapted by Robin Kingsland, Nottingham Playhouse’s studio production of The Princess & The Frog, is a charmingly sweet tale of growing friendship and promises kept. It is frog hoppingly perfect for the little ones as a Winter’s tale for small children and their parents and delivers far more than it promises.

Princess Fenella (Charlotte Ellen) is a haughty little Princess, full of her own importance and willing to fib because – you know – her Father is The King. When she loses a golden ball down the well she engages the children in the audience and asks them if she should tell her Father, the King, a big fat lie about the precious ball’s disappearance rather than admit the truth. Even the little kids in the audience know better than to lie and the sudden appearance of Filbert the Frog (Lee Rufford) disgusts the Princess. She is not at all interested in his slimy froggy friendship.

However, when the frog says he will retrieve the golden ball from the well, but only if certain promises are kept between them, she haltingly agrees to his conditions but hopes he will just hop away.  And, as we all know, ‘the promise you keep is worth a heap of gold’. This is all well and good but, will Princess Fenella keep her promises now she has the ball back and why is the frog terrified of seagulls? What will happen if the Princess gets the crown trapped in her hair again? Will the kind audience members help her out of her predicament? 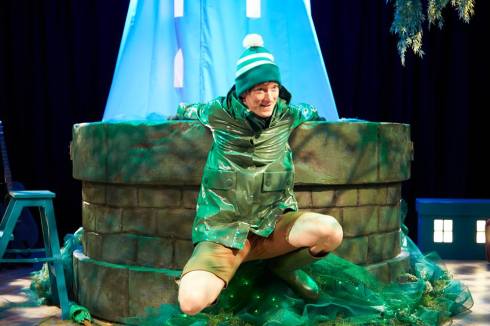 The Princess & The Frog is sixty minutes worth of utter theatrical charm and much engagement with the fascinated children throughout. These small kids who recognise the sound of computer games (that is scary) even replicated the tone of the Princess in her weary reminders that her ‘Father is the King – you know’. All in great humour though. Both Ellen and Rufford are perfect performers in this type of show and demonstrate a fine balance of performing their roles and being mindful of the occasional small child that wanders on to the set or another that is unnerved by the flying seagull. Both actors make the show magical and inclusive for their young audience who are engrossed in this pre Christmas treat.

Adding to the magic is the very pleasing set design (Dorrie Scott) that takes us from a well outside the palace grounds to Princess Fenella’s bed chamber. Lighting is by Stephanie Bartle and the sound atmospherics courtesy of Adam P McCready. Amanda Hall is movement director on the show. 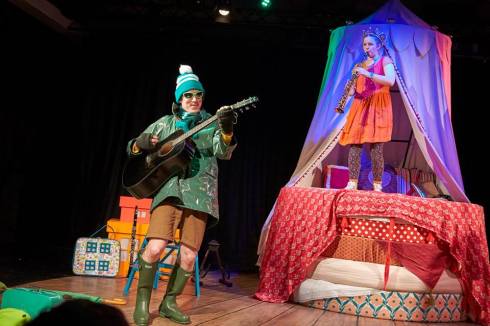