It is funny how times change and press and public attitudes change in history. Many times in the lives of even established literary figures like Charles Dickens their new works have been criticised and matched against their other popular works. When Dickens’ A Tale of Two Cities first came out in novel form it was not liked by the reviewers yet Dickens himself considered it to be the best novel he had ever written. It was considered that the plot was too long and drawn out and that the horrific depiction of the ancien regime was too mechanical in its horrors and the characters were like emblematic puppets representing good and evil. 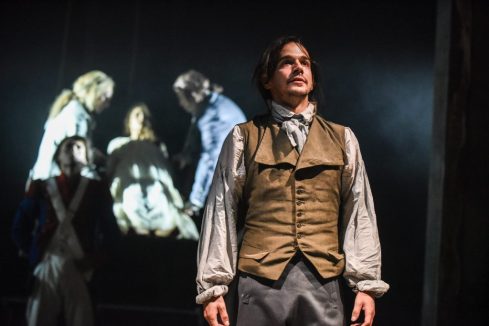 The court scenes however were praised for their realism and wit. Contrarily, Dickens’ writing style was suddenly considered too mawkishly sentimental as the story draws to an emotional close. Here the critics in his time thought that Dickens was being a terrible ham on paper. It wasn’t the best of times; perhaps even the worst of times for the great author. But thankfully, times and reading fashions do change and opinions can change over time. These days A Tale Of Two Cities is rightfully acclaimed a great and glorious novel in the pantheon of classic novel writing and its often complex plots make for a rich reading experience. But the question now is: how does a play version of A Tale Of Two Cities work on stage? Can it, like the RSC’s theatrical treasure Nicholas Nickelby, be an adaptation that really gets to the heart of the story; a story of gallant self sacrifice within such culturally diverse lands such as England and France?

Merci bien for reading so far mes amis. Enfin come the gems of praise for The Touring Consortium Theatre Company and Royal & Derngate Northampton superb production of A Tale Of Two Cities brilliantly adapted by Mike Poulton and directed by James Dacre. 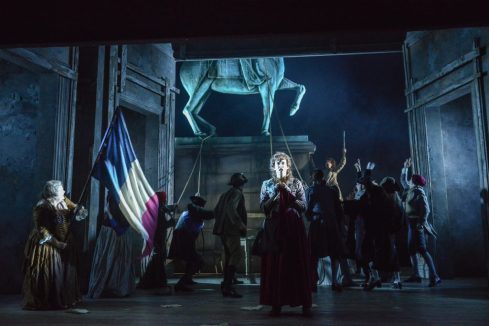 … rings with passion and pace throughout the entire whole two acts.

This is certainly not some plodding production that has the audience with one eye on the stage and the other regularly considering the exit signs. Mike Poulton has done an utterly superb job of finding the heart and soul of the novel and presenting a text version for the stage  that rings with passion and pace throughout the entire whole two acts. There is no time to be complacent whilst witnessing the hopes and loves and terrors that affect the characters and their stories. Not all the characters are sympathetic, even the main ones, that one assumes the audience will root for. A semblance of hope for the people’s redemption in the troubled and violent times that unfold and drip with blood on the stage is rather thin on the ground. Death can be but a slicing guillotine whisper away. She is truly a cruel mistress. 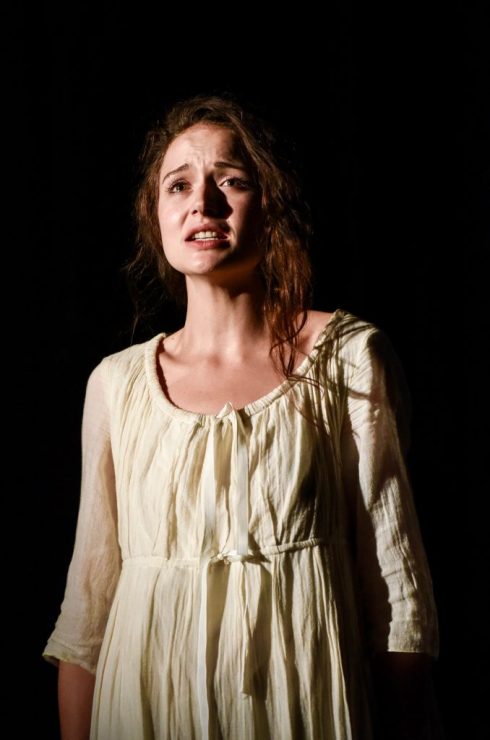 Stage designer Mike Britton has created an extra-ordinarily versatile set that is filmic in its execution (no pun intended). Each swift change allows the action to pro-pulse forward at a terrific pace and all that is unveiled is visually stunning. The set changes are aided by fantastic sound effects (sound designer Adrienne Quartly) and emotionally stirring music by composer Rachel Portman. The period costumes are exceptionally good and created by Ruth Hall. Paul Keogan lights the production with some consummate skill it appears as if we are watching graphically animated period paintings come vividly to life.

Aided by a Nottingham based top class ensemble of twelve community players the professional cast are totally brilliant in making Dickens’ dramatic story come so to life on stage. So much so that the gripped audience gasp out loud at the dark humour and audacity of the piece. Jacob Ifan is very solid as romantic hero Charles Darnay; Shanaya Rafaat strongly sympathetic as the lovable Lucy Manette; Sue Wallace darkly funny as Pamela Keating and Miss Pross. Noa Bodner chills as duplicitous Madame Defarge who embodies the chaos of the revolution. Patrick Romer remains admirably earthbound and stalwart as Dr Manette and Joseph Timms extra-ordinarily good as the conscience struck drunken lawyer Sidney Carton. The main ensemble pick up the multitude of other roles with theatrical alacrity. There is never single a moment when the audience is not gripped. Pardon. Il n’y a jamais un moment où l’audience est n’est pas excité.

James Dacre has put together the perfect ensemble of this remarkable production and credit has to be given to Struan Leslie as movement director and Terry King as fight director. The combined directorial work culminates in a production that blends realism with grand artistic licence and visual flair to create an extra-ordinarily good night at the theatre. What the Dickens! Get yourself a ticket for this sharper than sharp production on its final stop of the nationwide tour.