Based on Old Possum’s Book of Practical Cats by TS Elliot and adapted by Andrew Lloyd Webber and originally produced by Cameron Mackintosh with the Really Useful Theatre Company, this production of Cats from David Ian Productions in association with Michael Watt once again electrifies the Nottingham Concert Hall stage! The last visit to Nottingham was in 2014 and the return visit with a fresh new cast proves that Cats still has stamina and great musical theatre appeal.

Once again, the junk yard set is much wider and taller than the original London set and whilst there is no revolve and reveal in the opening act ‘Jellicle Songs for Jellical Cats’ the magnificent width of the Royal Concert Hall stage allows for more exuberant dance and staging of the Cats stories throughout. This reviewer (who is showing his age now) actually preferred this setting to the tight space in the original New London Theatre which had intimacy but some cramped discomfort in seating. So to the show itself;

This 2016 company have kept in all the popular cat characters, dynamic dances, drama, humour and music of the work so regular theatre goers and Cats lovers plus people new to the musical, won’t be disappointed. Though this time round on its eagerly awaited visit to Nottingham the sound scape is phenomenal and the live orchestra music has a slightly more evolved rock feel in some numbers. Each of the members of the Cats ensemble shine in their own right and every word of the songs and speech throughout is mostly crystal clear. The dance and movement throughout is ultra fluid whether flying through the air or slipping into place amongst the junk on the set. All of the tall junk filled walls of the set were used with great imagination and the lighting effects are breathtakingly atmospheric and beautiful.

The only piece we weren’t sure about was the choice to turn The Rum Tum Tugger song into a rap style depiction of what was originally a, tongue in cheek, sexy rock and roller. Perhaps it is a generational thing but for us at East Midlands Theatre.com it didn’t work so well and the clever lyrics and jokey sexuality are kind of lost to this style of delivery. This is not denigrating Marquelle Ward’s performance – his vocals and break dancing are terrific – but our small criticism is in our audience experience of the creative decision. 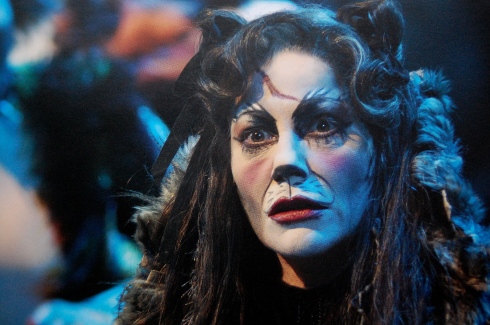 In any production of Cats the success is down to ensemble slickness, dance and characterisation talents and the ability to sing to a very high standard whilst dancing and of course to the rendition of its most famous solo song – Memory. In this touring production we are lucky to have the superb talents of Marianne Benedict playing the sad old cat Grizabella and her rendition of Memory is utterly superb. Her determined but ultimately forlorn nature as she tries to re-capture the flexibility of her youth through dance is very touching.

The show is technically spot on as is the lively tight choreography and our highlights include certain performances that give the show a vivid continuity of characterisation and storyline. These are Matt Krzan as an assured Munkustrap, Shiv Rabheru as a delightful Mr Mistoffeles, Lucinda Shaw as Jenny Anydots to die for and the superb Emily Langham as Rumpleteazer and Joe Henry as Mungojerry (R and M stole the show as well as the household goods!) In the second half Lee Greenaway is charming as Skimbleshanks and performer Greg Castiglioni wows with his three cat roles as Bustopher Jones, Gus the Theatre Cat and the pirate cat Growl Tiger.

As I leave the theatre tonight I am surrounded by adult audience members (some with children) smiling like the cats who have got the cream. We all had a Jellicle Ball and no pussy footing around.