Not only is there ‘Midsummer‘ madness and magic in the air tonight at Nottingham Theatre Royal as the professional Royal Shakespeare Company arrive with their touring production of A Midsummer Night’s Dream – a play for the nation but six amateur players from Hucknall’s Lovelace Theatre Group are in the show too!

As part of the 400th Anniversary of Shakespeare’s death, with an Equity agreement, these talented amateur actors and some local schoolchildren are getting the chance to live the ‘Dream’ on the professional stage. Throughout the week thirty children from six Nottinghamshire primary schools will be taking part. For them and for the audience it is a wonderful chance for all to experience and share in William Shakespeare’s genius in his most fun and beguiling comedy.

For the Nottingham production as the rude Mechanicals we have Flute (Daniel Knight), Starveling (Tom Morley), Bottom (Becky Morris), Snout (Jen White), Snug (James McBride) and Quince (Linda Mayes). Their Lovelace Theatre Group director Pat Richards must be exceptionally proud as must the actors themselves. All the amateur participants have been working closely with the RSC creative teams and RSC Education department over the last three months and tonight is their first night. Ambleside Primary School children and Hempshill Hall Primary School children (Red Team) play the fairy train this evening and exceptionally good they all are too. 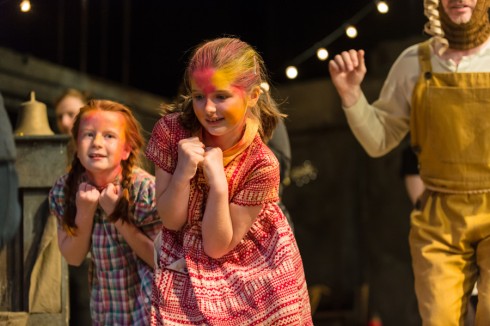 This ‘play for a nation’ truly is a magical production like no other. Set around the Blitz damaged 1940’s with varied costumes (Gayle Woodsend – costume designer) to match the period and then others more eclectic to theatrically off set the feel. Titania’s fairy retinue appear as returnee evacuees. Tom Piper’s desolated and dust encrusted wooden set gives a fresh meaning to ‘treading the boards’ and the old grand piano and tatty red theatrical curtains give the staging a real unworldly touch of disorder, or ambivalent limbo.

In a play full of sexual confusion there are clear signs in this production, directed by Erica Whyman, that the old male order is starting to be eroded. This has the added effect of creating more than usual marital friction, a whole lot of fun and gleeful confusion all around. The multi-ethnic casting gives the play a super exotic feel with Ayesha Dharker as a very sexy Titania and Chu Omambala as a cool dude Oberon – King of The Fairies. Combined they are a fairy royalty to die for and Shakespeare’s text runs trippingly off their tongues.  It is often the case that the actors playing Oberon and Titania double as their human counterparts Theseus and Hippolyta but in this version Sam Redford and Laura Harding take on the roles and are delicious in their tetchy relationship with each other.

Lucy Ellinson’s charmingly androgynous Puck is an eye popping delight. She practically pulses with bare- foot excitement and mischief as she lays her spells on the lovers and Bottom the weaver and flits around the stage and at one point out into the audience. There is an exotic frisson between Puck and Oberon that works very well too.

A Midsummer Night’s Dream wouldn’t be satisfyingly complete without a cast of excellent young lovers. Helena (Laura Riseborough), Hermia (Mercy Ojelade), Lysander (Jack Holden) and Demetrius all rise to the challenge of marrying comedy with pathos and they are all particularly funny in their sparring. There is a super on stage chemistry between them all and a laugh out loud moment when Demetrius insults Hermia with “You dwarf!” and Mustardseed (Ben Goffe) who is an actual little person flies across the stage to kick his legs. Ooops! Spoiler alert! 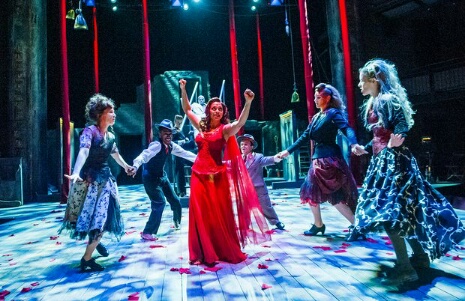 As for those Lovelace Theatre Group actors; the real life amateurs playing inept but well meaning amateurs rehearsing and performing a play within a play. Well, they are blummin’ fantastic and deserve all the praise and adulation that practically streams from the audience to the stage in  effervescent flows like one of Puck’s magic spells. This reviewer for one was spellbound at their achievements and the laughter they generated. It is worth remembering that the amateur doesn’t mean poor it means done for the love of. These actors will remember these moments for the rest of their lives. Their presentation of Pyramus and Thisbe is the funniest and most inventive this reviewer has ever seen. 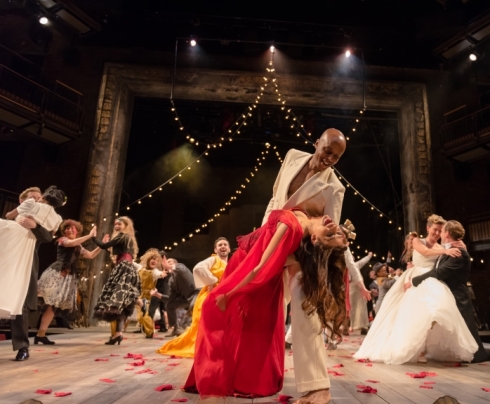 With live music, a very lively cast and some clever use of a moving staircase, especially as Puck chases the lovers through the woods. makes for an extra-ordinary night out at the theatre courtesy of the RSC, Lovelace Theatre Group and a certain William Shakespeare. 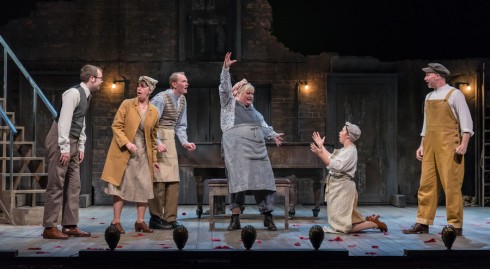