It is an interesting position going to review a theatre musical without ever having seen the popular film or read the book it is based on and perhaps that is for the best. One has no comparisons to make with the original stars or the film concept. Such things can be vital to fans of the story and I am sure we have all said “Yeah but he/she wasn’t as good as in the book/film or they left out the car chase and buildings exploding in the stage version” well maybe not the last bit in Legally Blonde – the musical.

So, holding those thoughts this reviewer is at Curve Leicester for a matinee production of Legally Blonde directed by Nikolai Foster. Sometimes matinee performers can be thought of holding back for the evening performance. Not this lot.

The piece is set in Malibu, LA County, California and Harvard University and we originally find sweet but ditzy Ellie Woods (Lucie Jones) existing in her superficial and pampered world of non stop shopping, dating and sorority society. Could life get any better for Ellie Woods?

Well if we carried along this fluffy pink route there would be little story; no challenges to be overcome. Enter the perfect boyfriend Warner Huntington III (Danny Mac) Hold on! That’s not it folks. Life doesn’t suddenly become perfect just because some handsome guy who has ‘everything’ and who appears to be the ONE wants to take you on a special dinner date.

Like OMG Guys! The scoundrel dumps her for another woman called Vivienne, a more intelligent female, and poor Ellie is left out on a loveless limb. He needs someone more serious in his life to take him and his self important pomposity where he expects to be in life. Ah ah, here are the beginnings of a musical drama. Once the audience get their heads around the peculiar and at times insular world of US college sorority and fraternity, which imposes its own caste system, then we can move on.

Moving on is exactly what Ellie decides to do and she resolves to get herself into Harvard Law School in order to better herself, to gain some respect and to have her lover back in her arms. The notion seems improbable but in watching her pursue her goal we view a different, less vapid, Ellie emerging. We see someone who becomes less self centred and more open to helping many others in life – including her hairdresser friend Paulette (Tupele Dorgu) and even Vivienne (Phoebe Street) – the former love rival who becomes her staunch ally.

Legally Blonde works well as a piece of musical theatre entertainment, is very funny overall and turns itself around out of its positively pink bubble headed base to be an interesting look at a woman’s self discovery. One wonders whether along the way whether the guy who dumped Ellie will see the error of his ways and beg her to come back to him. Or maybe Ellie’s true love is mixed up with her ambitions to improve herself. Maybe being true to oneself is her more important aim. No musical spoilers here.

Two of the essential cast have eight legs between them and they are dogs Angel who plays Bruiser and Walter who plays Rufus in this matinee. There are seven dogs that will star in the full run and these two were excellent. Unlike a few shows this reviewer has seen recently where dog actors have been involved these two got to take their bow wows at the end with the performers.

In this super energetic production of Legally Blonde the whole eighteen strong ensemble work extremely hard and the wings of the stage must be a flurry of quick changes. There is a great vigour to the piece in the performing and it is choreographically vibrant throughout. Musical accompaniment is at the centre of the piece (literally) and directed by MD Bob Broad. 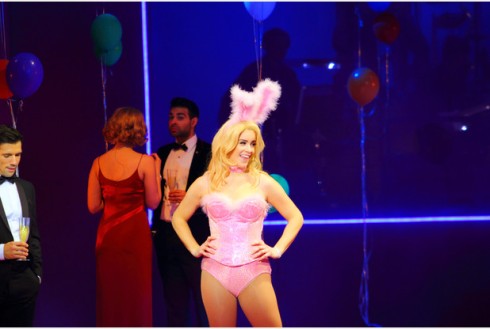 Lucie Jones is totally “omigod guys” brilliant as Ellie Woods and she carries an innate intelligence about her even in the early stages of her character’s development. She is no dumb blonde by any means. Jones’s singing and lovable personality are luminescent throughout.

Tupele Dorgu makes for a very endearing and comical Paulette. Obsessed with finding a man who is descended from poets and kings (an Irish fellow) she brings the house down with her song ‘Ireland’. 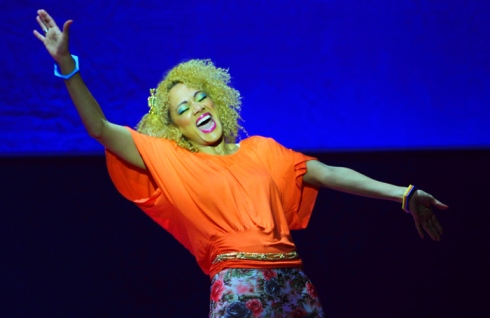 Most of the songs in the show seem to carry the story forward with the exception of the rap style song ‘The Harvard Variations’. Somehow it seems an add on for an excuse for another big dance number. Another song that is a bit of a slow burner is ‘Blood On The Water’. Half spoken in rhyme and half sung by Professor Callahan (Ian Kelsey) it only satisfies towards the last third of the song. Kelsey is a fine singer and actor so why this choice was made this reviewer is unsure. This incidents are the only slight marring of an otherwise totally stunning show.

Phoebe Street brings us an excellently manipulative Vivienne Kensington with a seeming heart of stone until circumstances encourage to see the generosity of Ellie Woods personality and her gentle determination to better herself despite people labelling her a stupid person because of her hair colour and preppy ways.

The talented young guys playing the romantic leads are uniformly great, possess super singing voices and each in their own way are very sympathetic. These are Emmett Forrest ( Jon Robyns), Warner (Danny Mac) and Kyle B O’Boyle (Lawrence Robb).

The set design (designer Matthew Wright) allows for a multitude of slide on settings and set pieces rising up from a large trap door. The whole show is bright and funky with some outstanding dance routines (choreography by Nick Winston) including the upbeat opening to the second half ‘Whipped Into Shape’ by Brooke (Natalie Hope) and the prisoners.