The Rock Opera, Jesus Christ Superstar by Andrew Lloyd-Webber and Tim Rice had controversial beginnings in the 1970s. Many religious groups attacked the show and demonstrated against its rock based core and that Judas (that evil man) was sympathetically portrayed as a man doing his best to deal with very difficult circumstances. Also contentious was the very fact that Jesus himself was being shown as a man with less than spiritual feelings towards Mary Magdalene. Some Jewish groups were unhappy with what they saw as anti-Semitic portrayals of some of the Jewish characters. This included the perceived depiction of the Judaic priests Caiaphas and Annas abetting the killing of Jesus Christ.

However, the show was also praised by others for bringing the story of the last days of Christ to a new and younger audience; an audience growing up on rock and pop music just like its creators. Eventually the 1970s show went on to great success despite Lloyd-Webber’s great dislike of the original over blown production on Broadway which he ‘damned for all time’ as “a vulgar travesty”. The Broadway production closed after only 711 performances yet the less gaudy and simpler Palace Theatre London production opening in August 1972 ran for an amazing eight years with 3358 performances.

The show has gone on to international success after success, regularly tours around the world, has had two versions of it professionally filmed (one in 1973 plus one 2000 revival version for tv) and more recently in 2012 a high tech modern arena version (at the O2 and touring) brought new life and new vision to the piece. It was supported and marketed after a TV search for a performer to play Jesus. Further back in 1991 a kabuki version was presented at London’s Dominion Theatre as part of London’s Japan Festival. DVDs of the shows have spread its messages and musically dramatic excitement across the globe. On top of this, many bold amateur musical societies have had a go at presenting Jesus Christ Superstar. On average 300 amateur productions are licensed each year making  JCS one of the most popular musicals to be performed by non-professionals.

Such is the case this week with Leicestershire based ESNA Players and their rocked up Arena style version of Jesus Christ Superstar. Set in the relatively small playing space of Loughborough Town Hall the production makes fantastic use of the stage by going all high tech and embellishing the show through the medium of a large LED screen and cross angled metallic staircases with excellent lighting effects. On screen we get a multi-dimensional modern day social media enhanced version of the musical and it is truly dynamic! With a cast of over fifty including the seven principals, ESNA’s fifty-one years hard won and talented pedigree for superb ensemble sound and production standards shows them at the top of the amateur musical theatre game. This is a relevant modern version brought bang up to date but it loses none of the emotional impact of the story of Christ’s doubts, betrayal and crucifixion.

Darryl Clarke as Jesus is astounding and brings his own special meaning to the show’s critical number ‘Gethsemane’. He is on stage for the majority of the show and captivates the audience with his presence through such numbers as ‘Strange Thing Mystifying’ ‘Hosanna’ ‘The Temple’ and ‘Pilate and Christ’. The modern dress depiction really works and Clarke’s Jesus and his disciples come across as very contemporary. 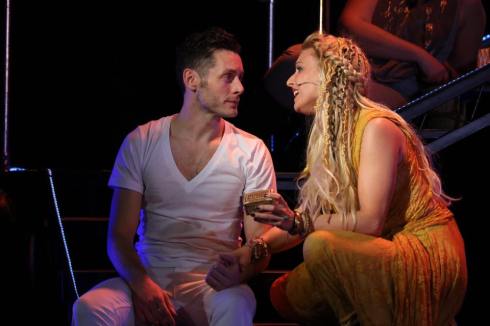 The show finds Judas Iscariot (Ash Bright) deeply concerned about his friend Jesus’ rising popularity and he criticises him for not heeding his concerns. He also has grave doubts that Christ is being hailed not as a man but as the Son of God. On top of this the Romans are watching every move of Jesus and his disciples and see them as a real threat to themselves and their rule. Bright pulls out all the musical stops in a solid performance in what is really a dual lead role. His highlights include the post overture opening number ‘Heaven on Their Minds’ and a heart rending ‘I Don’t Know How To Love Him/Judas’s Death.’ 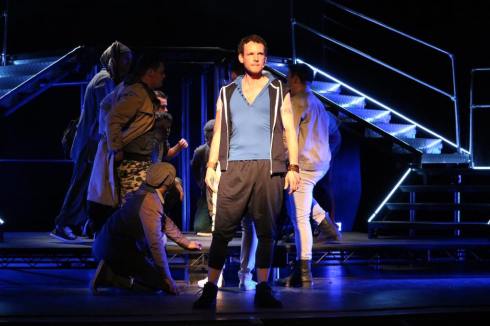 In the surprisingly under-written role of Mary Magdalene – one solo song only ~ plus choral – singer Natasha Bryan as Mary puts a great amount of emotion and feeling into the hit number ‘I Don’t Know How To Love Him’ to great applause. There is a genuine tenderness between her and Clarke’s Jesus Christ and her voice is very expressive and soulful. 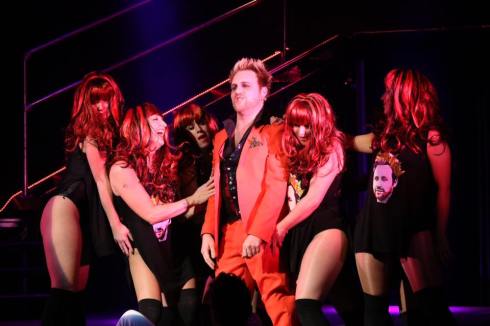 Herod (Ben Hardy) is directed towards a less camp version of his character and song ‘Herod’s Song’. Usually this monster of a self important, bordering on egomaniacal, character is portrayed in the campest of camp ways and seen as a bit of light relief during JSC. This is in the same darkly humorous way that the Thénardiers in Les Mis are seen. However in ESNA’s production director Emma Adcock has chosen to give us a more straight sardonic/sarcastic Herod. This decision is greatly to the benefit of the show and their King Herod’s accusing and bitchy song is accompanied and countered by a bevy of suggestively clad young dancers. The musical direction of this particular number is given a gritty urban feel by MD Jon Orton.

Pontius Pilate the Roman governor of Judea (Chris Wilson) is a dream of a role to play – one moment confused and reflective – the next hysterically damning Christ to his own crucifixion after he refuses to help himself and confess he a madman. Wilson shows Pilate’s doubts and political position well in his powerfully voiced performance especially during the ‘Trial by Pilate/39 lashes’ scene. His rendition of ‘Pilate’s Dream’ is haunting.

The other major characters are the vulture-like priests Caiaphas ( Johathan Penton) and Annas (Phil Burrows) performing ‘This Jesus Must Die’ and ‘Damned For All Time/Blood Money’.

The show’s choreography is top notch and created by ESNA choreographer Carl Edwards. The ensemble movement is one of the great strengths of the show particularly as the ensemble features over forty performers and they really fill the stage. When a crowd is needed it really feels like a proper crowd not just a small team of actors pretending to be a much larger group.

The live orchestra is fantastic with just the right amount of sound balance to accompany the singers. For amateur players both the music and the singing overall is superbly realised.