Red Ladder & West Yorkshire Playhouse production The Damned United written by Anders Lustgarten and adapted  from David Peace’s novel about Brian Clough’s journey from his beloved  Derby County to the team he hated the most .

Derby Theatre is excited to present the stage adaptation of  The Damned United, a play about the charismatic, yet  controversial legend that was Brian Clough, adapted from  David Peace’s brilliant and ingenious novel, on from  Thursday 7 until Saturday 16 April.

The Damned United is currently playing at West Yorkshire Playhouse and is thrilling audiences and the press alike. The Guardian described it as: “ingeniously staged by Rod Dixon, with an 11-strong ensemble capturing the rhythms of the game”, with The Times awarding it four stars and adding: “a damnably entertaining 90 minutes, no half-time”.

“A play for footballers and theatregoers” said the Yorkshire Times; and “a cracking new adaptation” four stars from the Yorkshire Post.

It is 1974. Brian Clough, the enfant terrible of British football, tries to redeem his career and reputation by winning the European Cup with his new team, Leeds United. This is the team he has openly despised for years, the team he hates and which hates him. Don Revie’s Leeds. 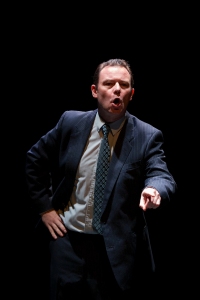 Starring in the central role of the outspoken, charismatic and controversial Brian Clough is Andrew Lancel. Andrew has numerous TV and theatre credits to his name including: DI Manson in Thames TV’s The Bill, the evil Frank Foster in Coronation Street and for theatre: appearing in Bill Kenwright’s Twelve Angry Men and as Brian Epstein in Epstein: The Man Who Made the Beatles for Leicester Square Theatre.

Appearing alongside Andrew are: Tony Bell, as the legendary Peter Taylor (Coronation Street and Midsomer Murders for TV and The 39 Steps and The Glee Club for theatre); Tony Turner (Downton Abbey, Call the Midwife and Doctors); John Graham Davis and Tom Lorcan.

Directing The Damned United is Rod Dixon. Rod became Artistic Director of Red Ladder Theatre Company in 2006, following his role as associate director at the Barbican Theatre in Plymouth. Rod is both a life-long Liverpool supporter and a believer in Proudhon’s principles of anarchy – the two might be connected.

The Damned United is written by Anders Lustgarten, adapted from the novel by David Peace; set and costume by Signe Beckmann.