A guaranteed ‘knight’ of good fun with…

Oddsocks are back with their ambitious new re-telling of classic English tale of ‘The Legend of King Arthur’. Expect vibrant characters, live music and laughter-a-plenty in their national tour, which begins in November 2015.

Telling the story of one of the most intriguing and fascinating English legends is an exciting project for Derby-based Oddsocks Productions. After the success of their last winter tour ‘The Wind in the Willows’ this winter sees Oddsocks turn their exceptionally funny hands to the gripping adventures of the Knights of the Round Table. 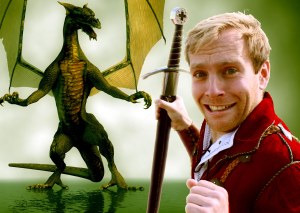 Oddsocks Productions was set up 26 years ago by Andy Barrow and Elli Mackenzie and is a critically acclaimed nationally touring theatre company who take classic texts and create bold, challenging, innovative and interactive theatre to be enjoyed by all. Twice a year they tour nationally indoors and outdoors, taking their work out to diverse communities across the UK. 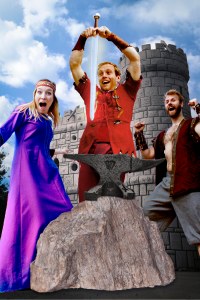 Elli Mackenzie, the writer of their latest tale and playing the wicked Morgan Le Fey in the production, describes why King Arthur is relevant to audiences today: “The traditional story says that Arthur is waiting to return and save Britain when Britain needs him but ultimately, I think Arthur stands for hope. I think Britain needs a bit of hope at the moment. There’s a lot of depressing news about the country and I hope the story shows that if you have a code of conduct, ethics and values, like Arthur learns, then we can’t go wrong we can only go forward.”

As well as touring nationally, Oddsocks also run their Open Doors scheme which aims to reach out to disadvantaged groups and engage, inspire and entertain them live theatre. Since November 2014 they’ve been working with national family support charity Home-Start to provide unique theatre experiences for disadvantaged local families.

Elli continues to describe why ‘The Legend of King Arthur’ is such an exciting story to share: “King Arthur has it all! It has a hero, it has love, dragons, fights, glory, history, humour, poignancy…it’s got everything!”

You can find out more about Oddsocks Productions by visiting their website.

Tickets can be booked by calling Derby Guildhall