“Yes that’s true and I rejoice in the fact that the pantomime has been in the same building. This is great because not only is it continuity performing with the same venue but also with the same director and writer– Kenneth Alan-Taylor and largely the same members of cast. Not all of course.”

Rebecca continued saying that this was a really nice thing, them coming together again like a family. She was especially happy knowing that the audiences at the Nottingham Playhouse certainly enjoy that continuity of some of the same faces coming back- year in year out – and enjoy seeing those special relationships on stage. I asked Rebecca to tell me about the various Pantomime roles she has played over the years.

“Gosh! I’ve played everything from principal girls, principal boys to fairies, to queens. I’ve never played a baddie yet but I am sure that that time is coming – soon! I was Queen Gertrude last year in Sleeping Beauty but she wasn’t bad – she was good. (laughs) She got the occasional ‘boo’ because she was basically henpecking the King. My mate Anthony Hoggard was the henpecked King Hubert. I don’t know if I would like to play a proper evil Queen right now but I reckon I would if I was given the opportunity. Certainly I am getting that age now where (laughs again) that’s ALL that’s going be on offer!!! I’m definitely too old to play principal boys and girls now!” 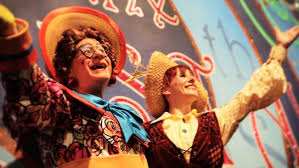 In a recent touring production of Forever Young some of the Pantomime cast including Rebecca Little played much older comical versions of themselves. Rebecca has played her character in all four separate productions of Forever Young – always playing the same role in which the actresses leg falls off. Rebecca picks up the story.

“Yes, I played an 80+ version of myself in the future where she has got an ailing limb. The play went on tour for the first time to Oldham Coliseum Theatre, the new Doncaster Cast Theatre and to the Warwick Arts Centre. It was interesting because as part of the script we had to remember names of different members of each theatre’s board members and former actors. Whatever theatre you are in you are talking about well known members of that theatre’s history. Some are even joked about as being passed on (yep dead) because the play is set in forty years into the future where the theatre space has been turned into a care home for cranky elderly actors. There are portraits of these people on the back wall and the portraits are changed according to the next tour venue. That was quite a good challenge for us. The various audiences loved it, as did we!”

Rebecca then told me about her early training at Arts Educational School Tring Park in Hertfordshire and was impressed that Julie Andrews also trained there. It is now called Tring Park School for the Performing Arts. It used to be linked with the Arts Educational school.

“When I first joined Arts Ed at the age of eleven they were linked. They even had the same Head. Over the years they became separate entities and governed separately. I was lucky enough to audition at eleven years old. I was there for seven years and went all the way through my GCSEs and A Levels there. Obviously I was dancing, singing and acting every day I was there because it is a theatre arts school and in my last year I became head girl. I left at eighteen and I was lucky enough to get into the Arts School in London and specialised in musical theatre and got my musical theatre diploma. This qualification would be considered a degree now.”

I asked her about being the age of eleven and inspired to eventually be a professional performer, what she may have done previously in the amateur field.

“Well, I grew up in a little town called Northwich in Cheshire and I can’t ever remember not being involved in some kind of theatrical event. It wasn’t a family thing and that can be the way in, can’t it? Mum and Dad treading the boards etc. I think the way in with me was the little dancing school I went to from the age of three and, incidentally I was only sent to dancing school because I was a little bit of a tom-boy and a bit clumsy! My Mum thought it would give me a bit of poise. Ha! She didn’t ever think I would make a career out of it.

Now I think, I recall how it was. The dancing teacher for the dancing school was also the choreographer for the local amateur dramatics group. It’s a bit of a mouthful but I think they were called The Mid-Cheshire Amateur Operatics Society. Nowadays I believe they have re-branded and are called the Mid-Cheshire Musical Theatre Company.”

Rebecca had fond memories of auditioning for The King and I when she was six and went because of the dance teacher’s involvement and the need for a lot of kids in the show.

“I only vaguely remember this Phil but I know I was playing the smallest Princess in the King of Siam procession. She is the one that has to crawl under the King’s legs and gets picked up in a bundle and given to Anna and she is also the one who has to say the speech at the end begging Mrs Anna not to go away. Very important speech that.

My Mum tells me the story of how, now bear in mind I hadn’t been reading long at six, she wrote the speech out for me in big felt tipped pen on a big piece of card. Apparently I was most insistent that I didn’t need any help ‘thank you very much’ in learning it. Off I went with this piece of card. On the next Wednesday night rehearsal my Mum came along and watched and we eventually got to my scene with the speech.

To her amazement, as she probably thought I wouldn’t know what I was doing and saying, I stood up and recited the whole thing perfectly without the card!

From then on I definitely caught the theatre bug and mithered my mother thereafter. Every time I heard there was a show coming up that needed children and later on older kids in the junior section, I auditioned. They were doing Carousel and back to back with that they were doing Snow White and they auditioned us on the same day rather than do two lots of auditions. I was lucky enough to get into both. I was a snow child and a dancing woodland fox in Snow White. Chorus in Carousel. I’ve been in few Snow White’s since then!”

Rebecca’s eyes light up at this next memory of her childhood theatre group getting the rights to do the musical Annie. She excitedly told me that she was ‘bonkers’ for Annie at the age of ten. She knew of the show from the film which she had watched again and again as a kid. She said it was massive audition which the whole of Cheshire appeared to turn out for. The amateur auditions were so fierce they even had recall auditions! She was so desperate to get into Annie that she would spend weeks rehearsing in her mum’s attic and had worked out a whole routine for ‘It’s A Hard Knock Life’ complete with bucket and broom. She wanted to show them something ‘extra’ at the recall when it came around. It was between Rebecca and another girl to get the part of Annie. The panel asked if any of the girls had indeed anything ‘extra’ to show them as part of the final auditions. She was so pleased that it was very likely she would be in the show anyway that she just said “No!” after all her practice. Eventually she got to understudy Annie and actually played Kate – one of the other orphans.

At the time Rebecca was attending the Shelagh Elliot-Clarke Performing Arts school in Liverpool and was at a stage where the theatre bug had bitten her so much that she asked her parents if she could audition for another professional theatre school (Arts Ed) and the rest is history. As the final part of our interview Rebecca was keen to look back on the amateur days through her souvenirs with great affection.

“I’ve actually kept all my programmes from all of my amateur shows which we used to get each other to sign and it was a BIG thing getting the principles to sign them! I’ve got lots of lovely photos from all of the shows too. They are all at my mum’s house now. I must get them out when I get time. I’ve got to go to an exciting meeting about the forthcoming pantomime now. Thank you for a lovely interview Phil.”