Black Men Walking is the first, hopefully of many, Eclipse Theatre Company and Royal Exchange Theatre co-productions. Starting out at the Royal Exchange Theatre Manchester it is currently on tour. Directed by Dawn Walton we witness the story of four black characters, three of whom form a male only black men walking group. The meet every month on a Saturday to walk the Dales, clear their heads and contemplate life.

The script is cleverly created by Testament (aka Andy Brooks) talking us across the Yorkshire Dales in inclement weather in the company of the three hikers, Thomas, Matthew and Richard. None of the three has thought to bring a map or compass and all of them rely on the older and more experienced Thomas (Tyrone Huggins). But what happens when seriously bad weather sets in and Thomas starts having a mental crisis and believes that the spirits of black men from Yorkshire history are calling to him and leading him to possible certain death? 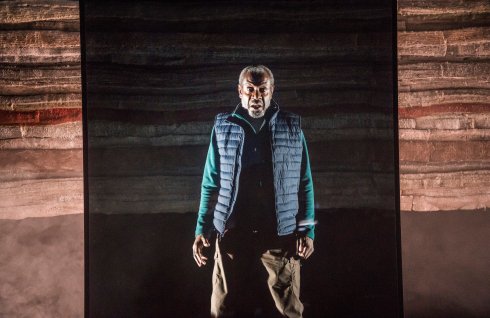 All four performances are excellent. Huggins gives his character a great deal of Yorkshire grit and personable warmth; Matthew is sympathetic as Matthew, a likeable doctor whose wife Vicky is constantly calling him on his mobile and he dreams of ‘one day’ of visiting relatives in Jamaica; Geeky, Star Trek Next Generation fan Richard (Tonderai Munyevu) amuses and engages with his story of a distant Ghanian father who he angrily believes has forgotten him and his family.

Along their long walking way, brilliantly achieved through mime, their steps are aided by a female spirit (Dorcas Sebuyange) who Thomas appears to be able to glimpse. Thomas has a history degree but has spent his working life in administration. The walks are an opportunity for him to teach the others about various ‘forgotten’ black people who have been prominent in British history. It is likely the other two have heard these stories before and they are distracted by their own concerns. A common conversational thread is how black peoples/immigrants are treated in the UK today. There is also a lot of gentle humour throughout Black Men Walking as well as the historical and racial aspects.

As the story is created by Testament the rapper, the script regularly takes on more rhythmic and poetic form. This aspect enhances, rather than confuses, the semi-mystical nature of the wild moors and the dangers of foul weather conditions. Simon Kenny’s layered set of mill stones and grassy patches and the cross cut strata of the rock formations works very well in its double aspect of reality and surreality. This, and the chanting ethereal sounds help create a place of deep theatrical mystery.

As the story unfolds Thomas, the normally level headed one, runs off into the dense mists descending, leaving the other two trailing behind and concerned for not only Thomas, but their own welfare. High up on some distant fells they encounter Ayeesha (Dorcas Sebuyange) practising Tai Chi. Initially she amusingly perceives the three guys as a sort of black ‘Last of The Summer Wine’ gang and only reluctantly goes with them as snow starts to fall. Coming out of the Yorkshire Dales setting we hear from Ayeesha about her experiences of racial abuse movingly told by Sebuyange. Back on the Yorkshire Moors the foursome re-trace an old Roman road and re-trace the history of many black people before them and get the surprise of their lives that changes everything forever!