Funny Girl is the story of the rise of a 1920s Ziegfeld Follies theatrical and comedic star named Fanny Brice. She was one of the highest paid stars of her day but led a life full of romantic sadness and a hit and miss career overall. The original 1964 production, after a succession of delays, fuelled the audience’s anticipation to fever pitch and Funny Girl exploded onto Broadway and made a star out of Barbara Streisand in the lead role. A popular film of the same story followed in 1968.

Jule Styne wrote the music, the book was by Isobel Lennart and the lyrics were written by Bob Merrill. The revised book is by Harvey Fierstein. The original 1964 director was Garson Kanin. The first ever Broadway show enjoyed a run of 1,348 performances over three years. It was nominated for eight Tony Awards but failed to win any of them. However history hasn’t cast this show entirely into the gutter. You might say it has risen mightily from the theatrical ashes of late. 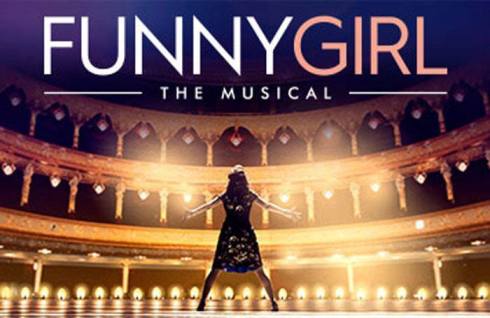 Hot from its West End success in 2017 we now have a new production of Funny Girl on tour featuring a modern phenomenon in the lead role – the winningly talented Natasha J Barnes coupled with the suave Darius Campell as subtle con-man charmer Nick Arnstein. This week it is enjoying a successful run at Nottingham Theatre Royal Mon 12 – Saturday 17 June 2017.

Having never seen the musical before this reviewer started from the sublimely played live overture (courtesy of musical director Ben Van Tienen) and wallowed in the rich 1920’s Ziegfield Follies extravaganza. Even the backdrop echoes the richly organic styling of Art Nouveau. The stage settings designed by Micheal Pavelka, costumes by Matthew Wright and lighting design by Mark Henderson make this a visual delight. The sterling direction and classy choreography are by Michael Mayer and Lynne Page.

For most of the first half we could be mislead into thinking that the story unfolding is a bit of terrifically well done theatrical fluff; plenty of broad and subtle comedy, lots of quality singing and dancing; perhaps a bit of romantic fun and slick styling that moves us easily from scene to scene of Fanny Brice’s early vaudeville life circa 1927. But where is the meat? Where is the drama of the story? At what point are the audience able to get their teeth into the tough interior and heart of the, not always roses and champagne, story of – vulnerable yet tough – 1920s showgirl Fanny Brice?

Well, as it happens, the audience approach the interval fully engaged and charmed by it all and then the tapestry of love between Fanny and Arnstein starts to unravel. It gets messy and tangles up. Nothing is clear anymore in Follies love land. He is planning to be away for quite some time sorting out his fortunes. He is unpredictable yet supremely confident. By the interval we are with Fanny on her naïve quest to ditch her theatrical career and follow her lover around the world complete with his dodgy gambling habits and his roguish matinee idol charms. Suddenly there is risk involved in the exposition and there is true drama happening. The audience are with Fanny (Natasha J Barnes) on her stirring anthem to loneliness and a yearning for normality ‘People’ culminating in her show stopper ‘Don’t Rain On My Parade!’

Both Barnes and Campbell totally excel in their parts and Barnes is a complete revelation on stage – completely convincing as Fanny Brice in her brilliant singing as well as her comic timing and ability to cope with corpsing on two occasions this delightful press night.

The entire ensemble are excellent throughout and especial mention must go to the three poker ladies Mrs Straktosh (Myra Sands), Mrs Meeker (Zoe Ann Brown) and Mrs Brice (Nova Skipp). They are on top form throughout and offer plenty of humour to the piece. Joshua Lay as – cast aside lover – yet forever friend- Eddie Ryan is most affectionately played and impresses with his tap dance routine and winning personality.

The devilish good looks and sonorous tones of Campbell’s Arnstein continue into the second half but take on a more corrupt personality willing to exploit Fanny to the point of bankruptcy. If it were a Victorian melodrama we would be booing up to the rafters!

Interestingly the real life Fanny Brice had a first (two day) marriage to a barber called Frank White until she filed for divorce. This was prior to meeting and falling head over heels in love with Nick Arnstein. In the practice and economics of musical theatre the first marriage never sets foot on stage.

Characters in this marvellous production are sometimes played as shadows waiting in the wings of fortune; distant yet audible voices warning against actions and feelings of the protagonists. It is a theatrical device that works very well throughout. Even as the second act darkens in tone comedy still bursts through in number s such as Rat-Tat-Tat-Tat and What Do Happy People Do?

Will it all end happily? Well you will have to buy a ticket to find out. If the press night audience are anything to go by a complete standing ovation seals the spectacular Funny Girl theatrical deal. Worth every single dollar’s admission cost and a darn sight more!