Greek tragedy marks the beginning of European theatre, and generations have reinterpreted the plays in their own ways. These rarely seen television productions feature some of the most renowned British actors in a wide range of approaches. 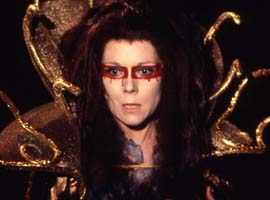 The first five screenings focus on the family of king Agamemnon around the time of the Trojan War. The final screening presents two productions of the most dysfunctional royal family of all: Sophocles’ Oedipus. More information at
www.nottingham.ac.uk/cadre

Learn more in a programme of free talks, and join the conversation on twitter @tv_tragedy

7pm THE SERPENT SON: AGAMEMNON + OF MYCENAE AND MEN

Saturday 12 March
12noon TALK by Dr Lynn Fotheringham and Dr Kalliopi Nikita: ‘Greeks taking on the World from Electra to Zorba the Greek’