The Diary of Anne Frank is an internationally known story of a spirited young Jewish girl called Anne Frank through whose diaries we learn of the horrors of living through German occupied Holland during the period of 1942 to 1944. The story is dramatised by Frances Goodrich and Albert Hackett and reflects on the lives of the German- Jewish Frank family living and working in exile in Amsterdam following Hitler’s anti-Jewish laws.

However, the play begins retrospectively in late 1945 after World War Two has ended. We meet Otto Frank, (Jake McGrath) the distraught patriarch, talking about his survival with Miep Gies (Kate Maguire). His mood is full of the emptiness and anger he feels knowing that his wife and daughter and millions of others have perished in the Holocaust. He is given his daughter’s diary that has survived the tragedy and so unfolds the touching story of Anne Frank.

The tale reflects back on the episodes in time that forced the Frank family to live in hiding in a cramped secret annex above the Opekta warehouse at 263 Prinsengracht Amsterdam. They are suddenly evacuees from a normal life of reasonable comfort and prosperity forced to live with the squabbling Van Daan family and a selfish dentist – a Mr Dussel. Worse still, they are all in hiding from the Nazis and in daily fear of being found and transported away to an unknown destiny in the Bergen-Belsen death camps. Mr Kraler (Matt Hodges) and Miep Gies are their connection with the outside world and they risk their own lives in order to help the others.

This tragedy, however well known, deserves to be told again and again and the young student cast and production team at Nottingham New Theatre present this claustrophobic tale well.

The studio based set, designed and built by Joanna Manning, is divided into two levels; an area at the rear wall is raised with a wooden facsimile of a sky light window hanging in mid air. Below that there are a mattress and chair with some steps leading up. To the fore is a clutter of old furniture arranged in the form of a temporary living room. Either side stand two bookend faux walls onto which are painted some of the text of Anne Frank’s diary. All combined it creates a low lit atmosphere even before the play has begun.

Rachel Towers’ Anne moves from gawky self-conscious school girl full of restless energy and fun, despairing of the behaviour of the adults but clinging to her father Otto, whilst shunning the comforts of her mother. Young Peter Van Daan (Andrew Houghton) is initially the butt of her jokes and teasing but they eventually grow to become fond of each other. Houghton puts in one of the most truthful of all the performances and is the epitome of the self depreciating awkwardness of a sensitive pre-teen boy. 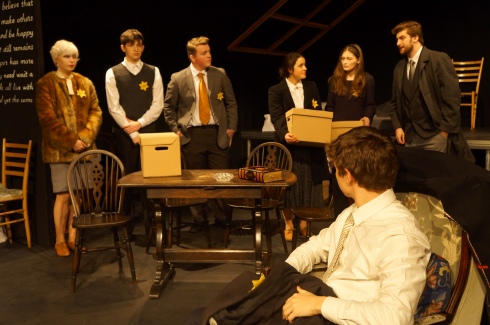 James Curling underplays the embarrassing and selfish father Mr Van Daan to a tee and Lara Cowler as Mrs Petronella Van Daan is delightful in her flirting with Otto Frank and a strong character player without upstaging the rest of the cast. The loner dentist Mr Dussel is beautifully done by Miguel Barrulas and the undercurrent of his displeasure at his general circumstances and having to share a room with Anne Frank follows him around like a black cloud.

Otto Frank is presented as a warm hearted and dependable father by McGrath although this reviewer would have been interested to see how the young actor would have looked with a shaved head and fine moustache to age him up a bit. Edith Frank (Iona Hampson) comes across best in her many emotionally wrought scenes and she is very motherly in the Hanukkah blessing and tender towards her ailing daughter Margot (Beth Mullen).

Despite some sporadic losses of audibility when actors are downstage the text is delivered well by the whole ensemble in this tightly crafted production directed by Ricki Crook. The final scene where we are presented with the fates of all the individuals depicted in the story and learn of the real names of the Van Daan family, Mr Dussel and Mr Kraler is very moving.

The play of The Diary of Anne Frank brings all of Anne’s writings into a two hour performance. It is a testament to the power of the human spirit. Some feel that once victims become part of that whole ethos of collective victimisation that there is no room for humour and no sense of hope for the future. The reality of this very human story is that the eight in hiding did not know that this was the beginning of the end for seven of them and hope and humour in terrible circumstances are what shine through and give the audience a glimpse into the life of a remarkable young girl who, through her diary, has inspired millions across the world.

The Diary of Anne Frank runs until Saturday 28 November 2015.

Originally published online by The Reviews Hub on 26 November 2015.