One suspects that since Simon Stephens’ play Pornography has been shown to title intrigued audiences across the world many a review innuendo or quip has been made about going to see pornography at (fill in the appropriate venue) and the performance thereof ever since. Such is the prurient nature of the British society. In a curious way this play is actually about the captive audience being direct and paying viewers of human perversity – but not always in the most obvious or salacious way.

Simon Stephens’ play reflects on the impact of the 7/7 bombings in London. It is populated with an impressionistic and somewhat diverse/perverse cross section portrait of London citizens. The event and aftermath of the terrible terrorist bombing campaign that shocked the nation is only part of this story. Most of the first act in the play centres on thoughts optimistic and pessimistic about the bid for London to be the venue for the 2012 Olympic Games and the euphoria when London won. That is, until we reach the chilling second half.

Pornography opens a season of plays at The Nottingham New Theatre – an entirely student run campus theatre at Nottingham University. It is a worthy and brave start to their season. It is especially commendable as the director Ollie Shortt has only had seventeen days to produce what is an impressive and haunting production. Even more impressive is that the cast are not drama students but students from other academic disciplines who happen to love to act. The quality of their performances and maturity of standards wouldn’t be out of place in a quality drama school. The technical lighting and sound (designers James Fox and Emma Kendall) adds much to the overall dramatic impact of the play.

The imaginative set is dominated by an eerie see through plastic tunnel at the back of the stage in which we view the actors frozen in profile. The impression is that they are caught in time en route to somewhere they may never get to. On the rest of the hazy set are grey blocks used for seating, a mattress on the floor and several small light bulbs hung within touching distance of the performers. It is within this ‘waiting room of gloom’ that we watch snippets of the complex lives of seven characters.

In the first act we meet incestuous brother and sister James and Kat (Max Miller and Charlotte Sanders). There is an initial hesitancy from James to form a taboo sexual relationship with his more willing sister but as the play progresses so does their mutual love until the guilt of their relationship blows them apart.

A racist and violent schoolboy named Jason (Arnaud Lacey) spouts his ignorant bile whilst lusting after and stalking his female teacher. In an unsympathetic performance Lacey does well to bring out his character as more than a whining one note schoolboy and is convincing in bringing the unseen teacher to life on stage as well as conveying the young man’s emotional collapse.

Dina Elkordy as Yasmin – an American living in London – is utterly compelling in her resigned quietude and easily the deepest drawn character in Simon Stephens play. There is something in Elkordy’s understated playing of the text and a sense of slowly bubbling resentment that comes across as very truthful and sad. 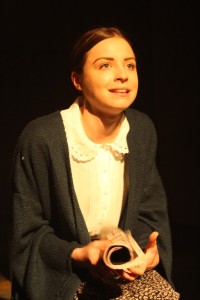 The play calls for characters much older than some of the actors playing them particularly in the case of 80+ Rose. World hating Rose is brought to life by Anna Stubbs and proves to be no parody of the elderly. With a shuffling – almost abstractly stylised – slow walk across the stage to her seat her gentle ‘nice old lady’ voice pulls you in and shocks you with her occasional profanity and voyeuristic sexual tendencies.

In the second half we meet the final three characters. Former student Sarah (Chloe Rose Grant) and university professor Mark (Pete Pryzslo) appear to be flirting with each other over drinks as Sarah asks him advice about getting a job. Things take a new turn as Mark invites Sarah back for a coffee and a chance to stay over in his spare room rather than travel back across London. All seems awkwardly romantic – the professor almost shy – Sarah unsure but not keen to travel at night. They dance. He attempts to rape her. She fights him off. An apology is offered the next day and, in a scene of most mature and truthful writing, she refuses his apology declaring it not to be enough.

In a sense this ‘truthfulness’ in Pornography is what hits home the hardest. The suggestion that the difficult or tragic things that can happen to us in life aren’t always easily brushed away. An apology isn’t always enough and time doesn’t always heal emotional or real wounds. Again, the admirable truthfulness and at times bravery in the Nottingham New Theatre cast and direction is laudable.

In a prolonged and deeply engaging monologue Harry Pavlou as Bomber 4 takes us on his journey from Manchester to London with the grim intent of a suicide bombing mission in a heavy populated part of central London. He never mentions Allah nor his own indoctrinated motivations only the Britain he sees (and mostly despises) and thus his alienation from the people he is going to kill as well as himself. As he speaks the rest of the cast are once again in profile in the tunnel. Pavlou’s monologue is interspersed with short bursts of personal history and sadly lost potential of the fifty-two victims of the London bombing.