For those that don’t already know (and due to this musical’s popularity there can’t be many that don’t ) Hairspray is an award winning American dance musical with music by Marc Shaiman lyrics by Scott Wittman and Shaiman and a book by Mark O’Donnell and Thomas Meehan. It is based on the 1988 John Waters film Hairspray. 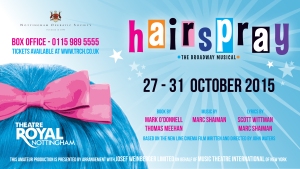 The lively songs include 1960s-style dance music and some rather ‘hip’ rhythm and blues. The simple but affecting story goes thus: Hairspray takes place in Baltimore Maryland. It is June 1962 and a pleasantly plump teenager named Tracy Turnblad has a dream of dancing on The Corny Collins Show, a local TV dance programme. When Tracy wins a role on the show she becomes an instant celebrity overnight and goes on to meet a range of characters through whom she learns about ambition, love and social attitudes. Then we get to see the serious side of Tracy as she launches a campaign to racially integrate the show proving Hairspray not only to be a frothy fun story but also a social commentary on the injustices of parts of American society in the 1960s.

Hairspray is a very popular show with amateur and professional companies and this week at Nottingham Theatre Royal the talented Nottingham Operatic Society present the smash-hit bright and bouncy musical with an exceptionally gifted cast and full orchestral band. The society have also made an unusually creative move in having a group of unseen pit singers in the orchestra pit who have been chosen for their fantastic voices and ability to hold difficult harmonies in the show.

With a funky 1960s themed set complete with designs of records and stripes and moveable set pieces – this production, directed and choreographed by Denise Palin and musically directed by Stephen Williams, is sparkling firework of a hit with the capacity Nottingham audience. They have come for a good time and NOS deliver that and much more.

Lead character Tracy Turnblad is played with great energy and charm by Aston Fisher. She has bags of personality, a clear note perfect voice and energetic dance moves that make her an obvious choice for the role.

Traditionally in this show Tracy’s protective mum Edna is played by a man and Dan Armstrong as Edna Turnblad is a gem of casting by Nottingham Operatic Society. Armstrong practically oozes 1960s American motherhood in his comical and sensitive role and his portrayal will be one for the NOS popular show archives for years to come. His song and dance scene with Ian Pottage as diminutive husband Wilbur singing “You’re Timeless To Me.” is one of the highlights of the show.

Amber and Velma Von Tussle (Lizzy Ives and Alison Hope) make a fantastic mother and daughter act. Ives excels at portraying the bitchy shallow glamour of her character and Hope is spot on as Velma Von Tussle – racist producer of The Corny Collins Show. Hope’s comic performance and singing is one of the cornerstone performances that mark this production with exceptionally professional standards.

Corny Collins (Mark Coffey-Bainbridge) and Link Larkin (Jacob Seelochan) seem to step straight out of the 1960s with their dance moves and confident singing and attitudes of the era.

Janine Nichole Jacques is strong and sweet as Motormouth Maybelle and is very powerful in the song “I Know Where I’ve Been”. There are some interesting names for the characters in this show but possibly the most interesting is the handsome young black guy called Seaweed J Stubbs. Aadyl Muller brings a natural attractiveness to his romantic character. His scenes with Penny Pingleton (Lauren Gill) are amusing in parts and touching in others as they begin to represent racial integration. Gill has a fine talent for gawky comedy and her transformation into a vibrant and sexy young woman at the end is stunning.

Full to bursting with terrific numbers such as “Good Morning Baltimore” “The Nicest Kids In Town” “Mama I’m A Big Girl Now” “Welcome to the 60s” and “You Can’t Stop The Beat” NOS’s production of Hairspray boasts a main cast of over forty performers from ages thirteen to sixty plus. Everyone of them put their hearts, voices and souls into the enthusiastic show and the stage lights up big time with local talent, even if some of them do have “inappropriate height hairstyles”. The 1960s costumes and wigs help make this show an absolute knock out!